Have you ever had a birthday/christmas where you think it will be your all time favorite... and NO ONE will never be able to top it?! For my 30th Bday, my hubs bought me an LV Neverfull and my brothers and SIL bought me the LV Pochette. They were AWESOME gifts! Who gets LV? And who gets two for one birthday?! Then... for my 31st bday, my brothers and SIL got me an autographed Troy Aikman poster... and I know it is hard for one to believe, but that could totally trump two LVs for me!
But do you know what happens when you put those things together?! LV and Troy Aikman (the Dallas Cowboys)?! You get one AWESOME aunt!
For Christmas this year, my Aunt Becky gave me 2 tickets to the Cowboys vs Eagles game, an LV Bosphore Backpack and a pencil drawling of AT&T Stadium. 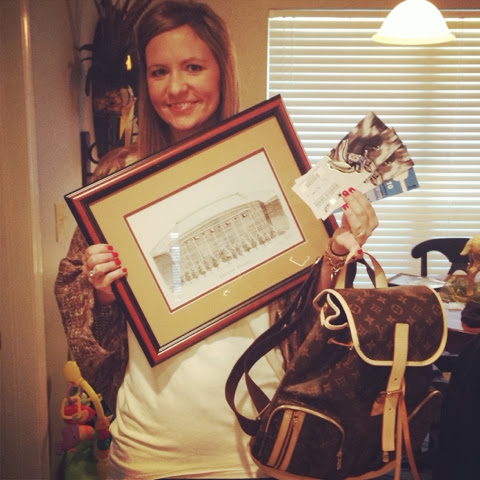 On Dec 28, Justin and I headed out for a couple days in TX! 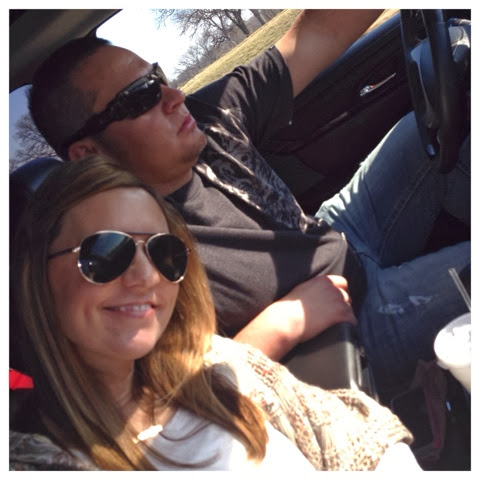 We drove to Allen TX to the outlet mall... and I have to say this is when you know Justin and I's relationship is WEIRD! I asked him to go to a football game with me... he says, yes, only if we can go to the Outlet mall! :) (in his defense, he wanted to go to the Oakley store for fishing gear. but the man was asking to go shopping?! no complaints here!)
From there, we drove straight to the stadium to check it out! 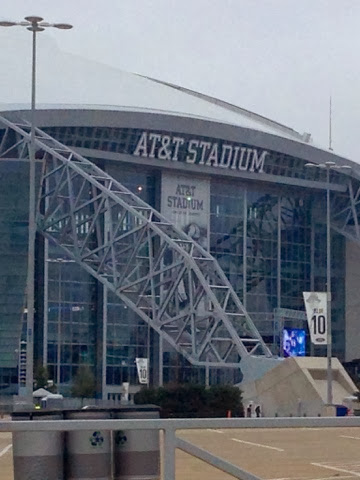 That evening, we headed to dinner and then to meet one of the girls I work with for drinks and out to a piano bar. I have worked with Adrena for 5 or 6 years and this is the first time I have ever met her in person! Ha! 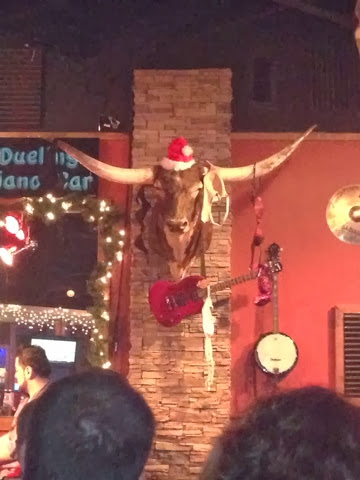 On December 29, we got up headed to In N Out for a game day preparation lunch! The game was originally scheduled for 1230, but it ended up being the conference championship so it was moved to 730PM. That gave us most of the day to check out the area and tailgate! 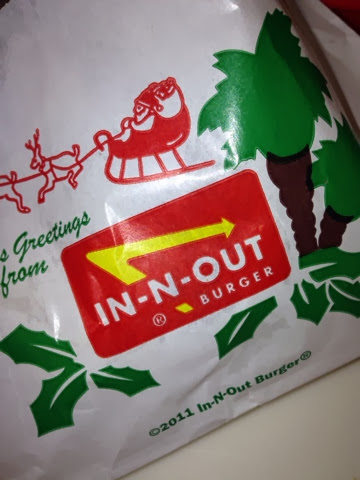 We had a parking pass so we headed to the stadium WELL before it opened. I just couldn't stand it any longer! ha! Once the gates opened, we parked, checked out the stadium, stopped by the gift shop and enjoyed some tailgating 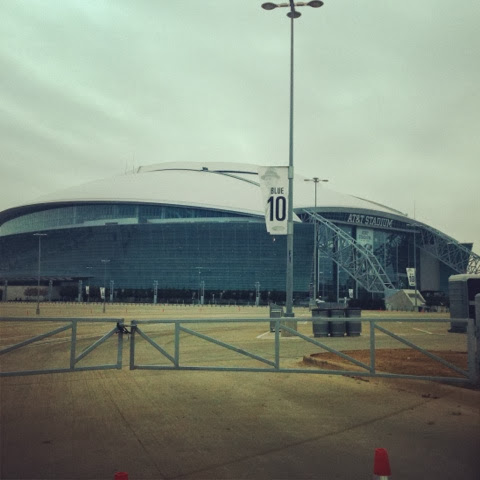 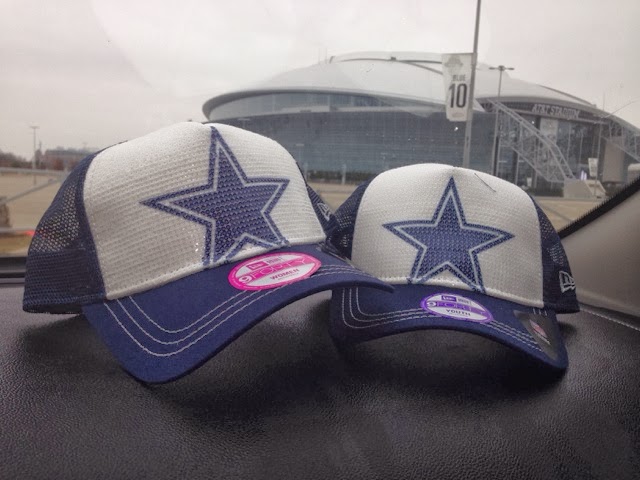 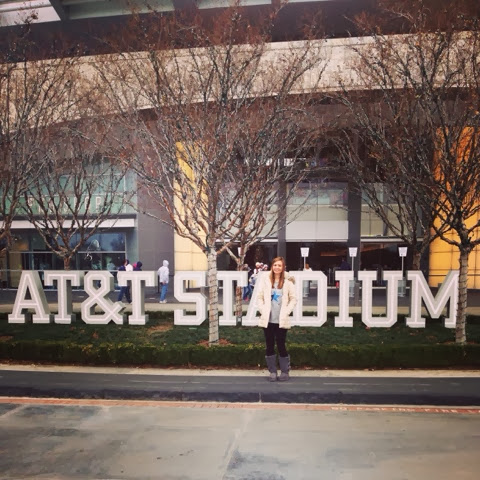 We were 12 rows up on the 40 yard line. Just one of those things you might never experience again! 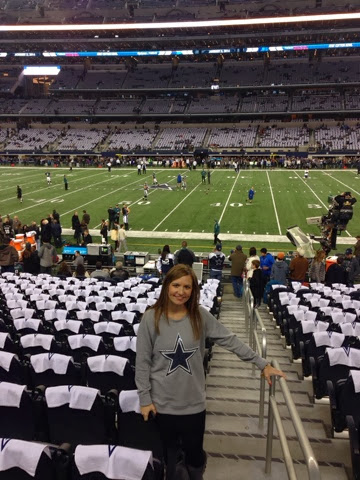 Jerry's World is just like nothing you have ever seen! 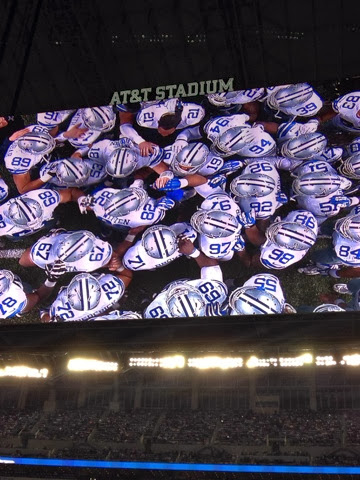 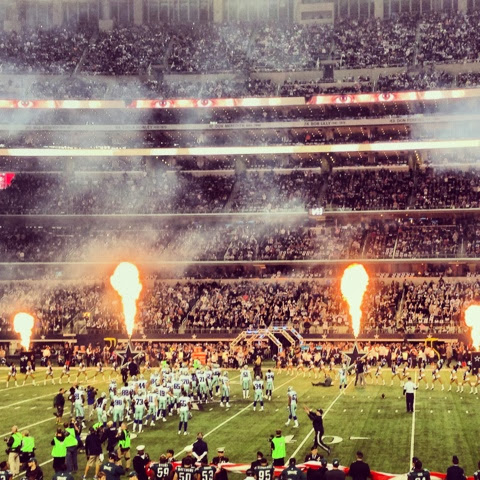 Thanks to Gigi and Poppa for watching our babies... and even dressing them up for the big game! 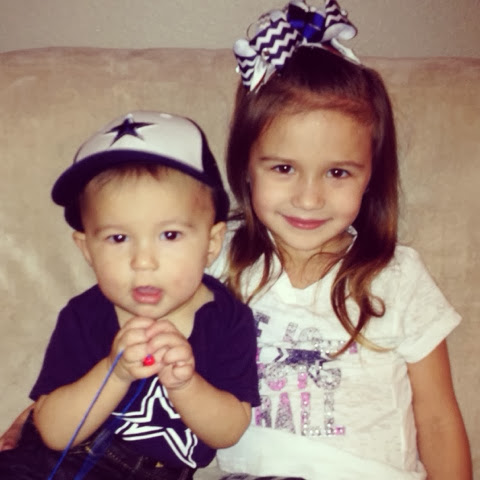 Home with their new gear! 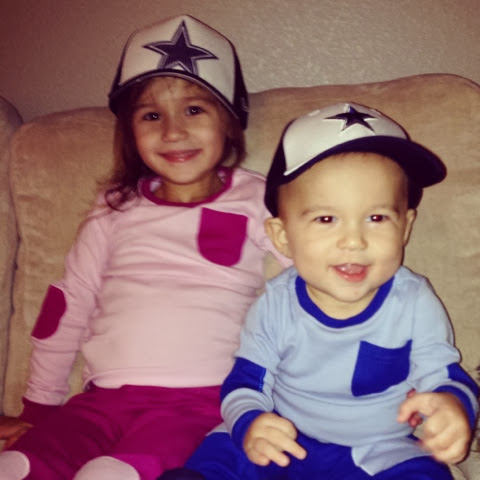 Thank you so much Aunt Becky! You are just too good to us! The next game I go to, you are going with me! :)
And did anyone notice I didn't discuss the outcome of the game... ya, it really isn't important after all! :)