10 years ago... {well 10 years as of Sept 6, I am late to the game. No surprise to you now!} I married my very best friend. I was 22 and he was 23. I met Justin in September 2001, got engaged to him in October of 2002 and married him in September of 2003! Most people thought we were CRAZY. And looking back now, I would totally have to agree!! I cannot imagine Hadlea getting married at 22. Why my parents never tried to talk me out of it, I am not sure?!  ...other than the fact that they really did love Justin too.
In 10 years, we have had our ups and downs. There are times when I have wanted to take his things and throw them out the door. Or several times I have told him I wish he would go back to living with his mother... and yes, those were only in very heated arguments. I never really meant it. Well... during the argument, I probably totally did. But I would have eventually begged him to come back home. Ha!
I can honestly say in the 10 years we have been married, only twice I have kicked him out of our bed. But it never lasted all night. Eventually one of us would give in and apologize. We could possibly both be a lot little stubborn!
I get a lot of compliments on Justin and I's relationship. We don't take things too serious and are pretty good at communicating the big stuff, so we play on a pretty even field. We both usually know what the other is thinking... or actually I know what he is thinking or is wanting to do long before he even brings it up.
If I had to go back 10 years ago at the little ol' age of 22, would I marry him all over again? Absolutely. Not a doubt in my mind. 10 years, 1 dog and 2 kids later, I totally love him ALOT more than I ever thought possible. He might slurp the milk in his cereal, play an annoying amount of spades on his phone, watch the dumbest fishing shows known to man, not LOVE football like I do or ask me if I am 'pissy' 100 times a day, but he does do laundry, cook more than I do, bath our kids, read them books, get the poopy diapers, fill my car up with gas because he knows I hate to, take the middle of the night bottle so I can sleep and will wear a Dallas shirt for me even though he despises them! I am still not sure why he married me?! If he knew he had to be half of the house wife, he would have probably looked elsewhere! Ha!
He gave me 1 dog and 2 kids that I can honestly not imagine life without. The 4 of them make up my whole heart. My life only feels 100% complete when we are all together. He is an awesomely annoying husband and THE best father... EVER.
I love you Justin Michael. And I will continue to text you every day that I remember and tell you, "You are my vest best friend". To which you either call and ask me what I have done wrong or respond, "Sure. You too". Because that is our love language. Never serious. Always joking. But you always keep me laughing.... 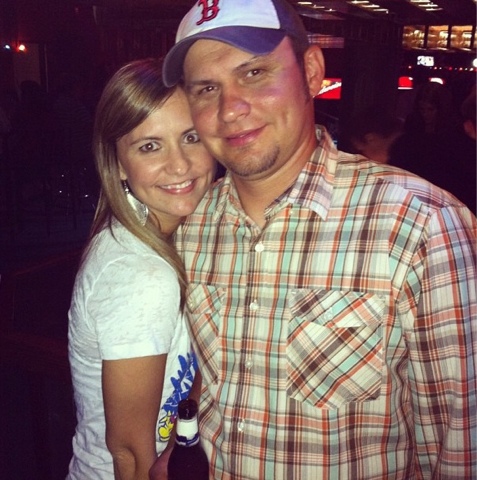