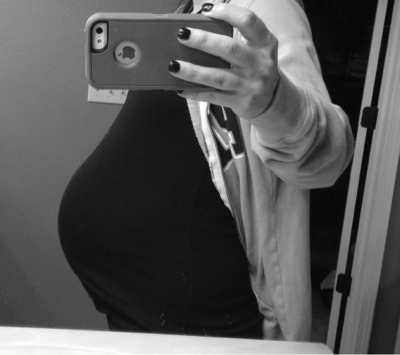 How far along: 40 weeks. I  mean Kason... for the LOVE! You are the second child. Aren't you supposed to come earlier?! COME ON!

Net weight gain/loss: 31 pounds {and again, if he would have decided to arrive early, I would have met my goal of staying under 30lbs. Not so much now! :-/}

Maternity clothes: All maternity! ...and I am running out of those too!

Stretch marks: I have seen a couple lines that make me SUPER nervous... but I think I seen the same with H and didn't end up with any. *fingers crossed!*

Sleep: It is either SUPER good or SUPER bad. No in between!

Baby movement: His movement is definitely slowing down. I don't think there is room for either of us anymore!

Food aversions: anything that is not listed above! :)

What I miss: The days of not being incredibly tired!

Looking forward to: Meeting him... end of story! I AM READY!

Best moment this week: Being another day closer?! Did I mention I was just ready for him to come on his own?! Ha!

Milestones per babycenter: It's hard to say for sure how big your baby will be, but the average newborn weighs about 7 1/2 pounds (a small pumpkin) and is about 20 inches long. The biggest part of your baby's body is his head, but his still-pliable skull will give it the flexibility necessary to squeeze through the birth canal. Many parents are surprised by how long and sharp their newborn's nails are from the get-go. Clipping them right away can prevent your baby from scratching his face.

I had my weekly doctor's appointment on Monday. My appointment from Thursday of last week was canceled due to two emergency c-sections. I still had no changes and no progress. My BP was up so they had me lie down for a while and then recheck it. It was still up (140/98). They sent me for lab work and I go back tomorrow, Thursday. Depending on my BP and lab work, they could induce. Kason still isn't as low as they would like him, but Dr G doesn't want me going over 41 weeks. So... if all is fine on Thursday, we will schedule the induction for next week. I have prayed so many times for him to come on his own, and I know there is still a chance he can. I guess he really will just come on his and God's time and not on mine! :-)

Come on baby K! We want to 'meet' you! Hoping he comes on his own!