I had no intentions of sharing his name today. Honestly, I didn't think that many people would care. But it is SO nice to know that I am not the only nosey curious one out there when it comes to people's baby's names.

I big fat happy HEART baby names. Common ones, Weird ones, Straight out of nowhere ones. I just love hearing what someone will be naming their baby. I think this has also evolved with time as I got older. I remember my cousin Shelly telling me at the lake one summer that she was going to name her baby boy Charlie. I was like, "what? why?". And funny thing today, Charlie is one of my favorite names. And her sweet Charlie, looks just like a Charlie. I just cannot imagine a better name for that boy! {sorry Shelly! love you! :-) }

I think as I get older, I realize I'm just not at nosey {true story} as I used to be. Or maybe it is because I just have so much more responsibility these days that I just don't have the energy to seek out certain things! Ha! And... I realize as I get older "to each their own" is totally true! We all have our own opinions. Ask me, and I will give you mine!

I said in a previous post that I have always kept a document with baby names on it. Most of these names have been on here since before we even got pregnant with Hadlea. I have added or deleted over time, but for the most part, I knew I wanted to use one of these for our future kids.

Girls: Hadlea, Hynlea, Leven, London, Lynnee, Lucha, Jaylea. {and I hope to have a little female yorkie one day named Lucha. I LOVE that name! Our names for Hadlea were down to Hadlea, Lucha and London. I think Hadlea just fits her, and I am so glad that we went with it, but I LOVE Lucha... and so did Justin.}

Boys names are HARD! I never really thought it would be that difficult, but after having to REALLY decide on one, I just couldn't help to think that boys are mean {and so are girls these days too}, but I just couldn't help but think what other boys would eventually call him.

Now... as a mother, I feel like I get 90% of the vote to name the child. I know... I am totally selfish, but I am selfish in alot of things.. why would naming a child be any different?! ;-) Enter Justin... we talked and talked about names. We set many nights on the couch scouring the Internet to look at names. We both made lists and removed what the other didn't like. We got it down to two names...


Justin: Kastin {like you're 'casting' a fishing rod. and yes, I am totally serious} and Me: Kason.

We have been stuck on these two names for a good 3 months. We have went back and forth. Polled everyone we knew. Or I polled everyone I knew because I knew they would agree with me! Ha! The one thing is, I actually liked Kastin. I thought Justin was SUPER creative with coming up with it, and he was totally getting those bonus points. But I LOVED Kason.

A couple weeks ago, I told Justin that we just needed to settle on something. I am NOT one to wait until the hospital to see their face. That is JUST. NOT. ME! I need things personalized and monogrammed. I told Justin if he was 150% sure on Kastin, we would go with it. I named Hadlea, and I would give in. But he gave me a look that didn't say he was even 100% sure. He just said if he had a choice today, that would be it. And I couldn't go with that...

Hadlea had been setting in the floor playing during this conversation of Kastin vs Kason. She looked right at Justin and said, "I don't like Kastin, I like Kason." {and she has referred to him as Kason for quite some time.} And that was the final straw. Justin said, "That's it. Hadlea can choose." and it was settled!

We will be welcoming...

And I guess you want to know where Havoc came from?! Ha! It is fishing related. Justin's idea... and I LOVE it! I just think it totally fits us!


And just for a sneak peak of his room... someone might or might not be creating us an art piece for above his crib! But you won't talk me into that until the room reveal! :-) 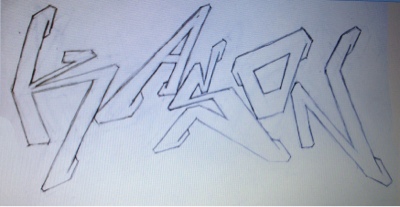 **and feel free to use any of the names above. we are totally done naming anything that isn't small, furry and has four legs! ;-)

Love, Love, Love his name and love that Miss H made the final decision!!!!! I also like how you shared all the other options. Yay, Kason!!!

I love names too and I'm always into unique ones (with a good story or not) ... I love, love your pick!!

Love the name and can't wait to see his room! With his middle name, I can already guarantee he won't be shy!! So cute!! And love that Hadlea chose it!! Let the monogramming begin!!!

I also love that you have to have the name ahead of time! My sils didn't know the names until they were almost forced to name them before leaving the hospital! Killing this monogram lover!!