The GREATEST trip from HELL

So remember THIS post? Where I swear for about two weeks everything was falling apart left and right?! It was a long two weeks, however, everyone is on the mend, healing perfectly!

But in the middle of that disaster, I got to go to Indianapolis with my sweet friend, Julie. So... Julie is Fred's (the fisherman) wife. They have another fisherman that lives with them between tournaments who is from Australia. His name is Carl. {stay with me...} Carl's best friend from Australia is a motorcycle rider. He is the fastest rider in the world. His contract is 20 million a year with Honda... and yes, I said TWENTY MILLION! His name is Casey Stoner. At 26 years old, Casey had decided to retire. AT 26YO! He has a new baby and just wants to be at home. This Indianapolis race would be his last race in the US. Carl and Fred were supposed to go to the race, but decided to enter a fishing tournament in New York. So just a few days before, Casey called and offered the tickets to Julie and I. We didn't really care at this point, we were just ready for a short no kids, no husbands vacation. {obviously this was before my family started falling apart!} 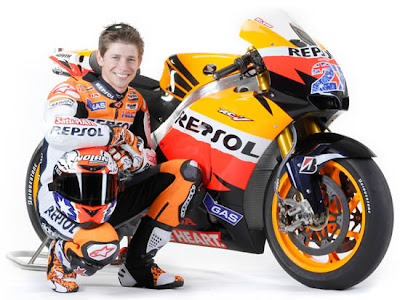 On Saturday at 5AM, Julie and I head out to Indianapolis. Because we bought our tickets only days before, we had to go from Tulsa to St Louis to Chicago and finally to Indy! Nothing like a last minute adventure! 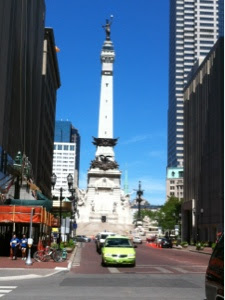 Indianapolis is BEAUTIFUL! I am not sure what I was exactly expecting, but it had the nicest, cleanest downtown! We stayed downtown at the Canterbury, a very old European style motel. It was awesome! There was a motorcycle rally with hundreds of bikes and also Gen Con (a gaming convention) was going on. Talk about interesting people... BIG Harley guys and gamers mixed together! It was an experience!
Indy also had some awesome restaurants! We enjoyed LOTS of quiet meals without kiddos! :-) 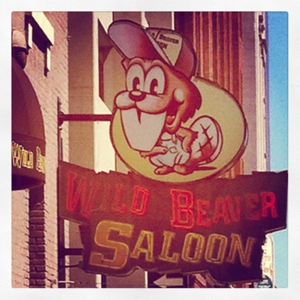 Saturday night, we made reservations at Ruth Chris! Fred is always going when he is on the road with sponsors, but neither Julie nor I had been... so we took full advantage! It was AMAZING! Hands down the best steak I have ever had! 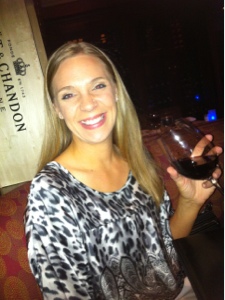 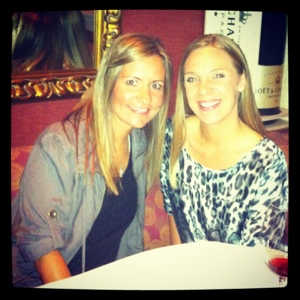 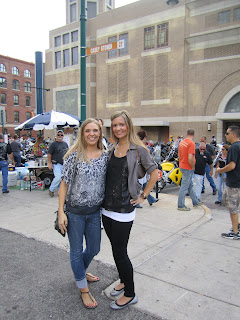 Saturday afternoon was qualifying for Casey. We didn't make it into town in time to watch, so before going to bed Saturday night, Julie and I checked to see how Casey would be starting. Imagine our surprise when the first thing we read was that he was in the HOSPITAL!! We had just bought last minute tickets, left our sick kids, hurt grandma's to come to a race that our star guy wouldn't even be riding in?! AWESOME!
He crashed part way through qualify fracturing his right foot and tearing all of the ligaments. Seeing how these guys race at over 200 mph and have pretty much broken every bone in their bodies, several media places said he might still race. So Sunday, Julie and I got up and headed to the track.

Here is the video of his wreck. :-(
We had pit passes inside the track, so we got to experience everything first hand! It was the coolest experience! 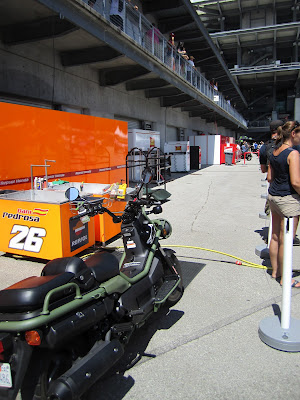 Starting off! Casey did end up racing and starting 6th! 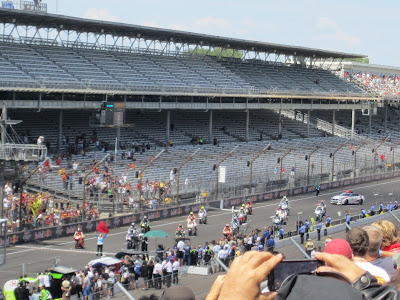 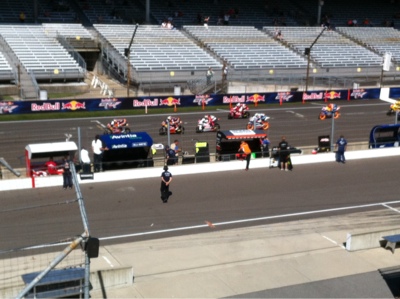 Casey had an awesome race for wearing a HUGE brace and boot. He finished 4th! Here he is after the race! Poor guy... I cannot imagine walking to and from my bike on crutches! 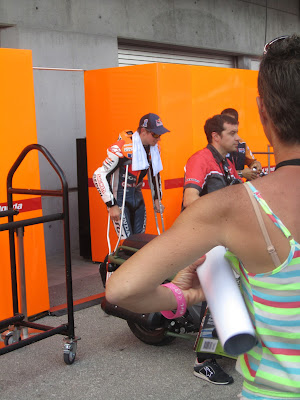 Right after the race was over, Julie and I hopped a cab to the airport! And we just didn't get any cab driver... we got THE CRAZIEST man EVER! We were driving 70 a 40. We jumped some train tracks and both hit our heads on the ceiling of the car. I started praying out loud. He didn't seem to care. I seriously thought we were going to DIE! Thankfully we were only a few miles away!
But just a few miles into the cab ride, he pulls over to this restaurant. He says "Get out and take a picture". Julie and I do not move. We think this guy is crazy already. He starts telling us about all of the famous race car drivers that come eat at this restaurant. He said we needed a picture with it because it was 'hystorical'. We just did what he said after that so he didn't murder us in the middle of the 'hood! And I wish I was joking! :-) 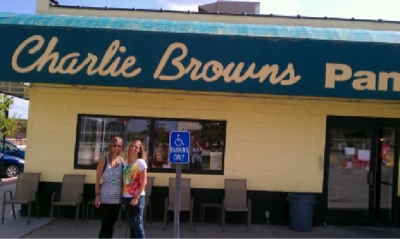 After we made it to the airport (which seemed to be like 5 days later), we were walking to our gate and ran into two men trying on their new motorcycle jackets. They asked if we would put it on and take a picture! Since we had a 2 hour wait, what else were we going to do?! Come to find out, these men were brothers and DUI lawyers in Kansas City. It totally gave us a good laugh... and after we talked some more, we found out that they live right next door to another professional bass fisherman! Totally small world! These guys were crazy and hilarious! You just never know the type of people you will meet! 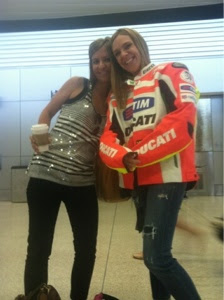 We finally made in back home around 11PM Sunday night! With everything that went on, I was so wore out! But, I would do it all again if I had to! It was truly a fun experience and not one many people would ever get to do! Just thankful for awesome friends... with connections! :-)