So who knew selling a house {picking up, cleaning, showing, etc.}, getting a house ready to move in, having a full-time job and a 2 year old could be so crazy?! :-) Holy cow, my mind is everywhere! So... kind of a recap:
But...
This little girl has learned to right her tricycle and is everywhere! She might have learned a couple months ago, but I am just documenting it! 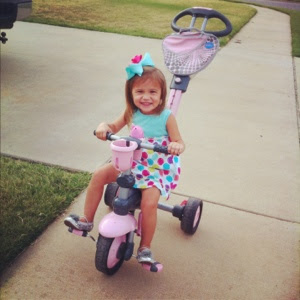 We had a showing Friday night so we had friends over at the new house for pizza. It was totally last minute as the Roumbanis' were going out of town for a few weeks, and then we decided to call the Goff's since Taran is making some stuff for H's new room. We planned to fish, but it started raining... but it left this beautiful full rainbow! ...perfect rainbow the very first time in our new home totally equals good luck, right?! 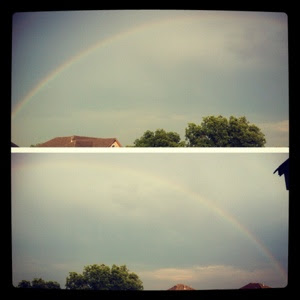 Since the kids couldn't play outside because of the rain, they made the best of the empty house inside! Have you ever had 5 kids running/crawling around in an empty house full of tile! LOUD... is all I can say! But they were loving it...

Daddy and Richard started on the fence at 5AM on Saturday. The rest of us slept in! :-) 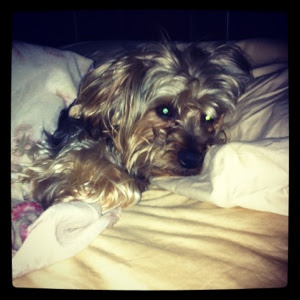 H and I met Nana and Aunt Sharon for a little shopping at a craft show. H was so awesome! I will write another post for the things we bought!
Sunday was spent over at the new house! It was a LONG day! Daddy and Richard finished the fence, I mowed the yard and cleaned up some stuff. The painters were there for H's room and playroom. We got so much done and Hadlea was PERFECT to just play with her babies outside! 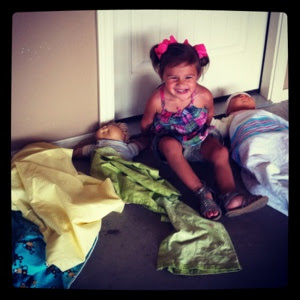 We later took a little swim since H was SO good! 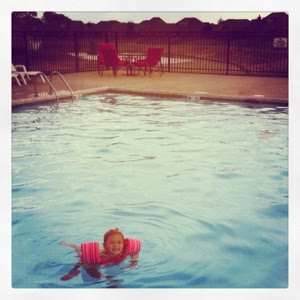 And of course, daddy was itching to do a little fishing!
We met some of our neighbors and everyone has been so friendly! Although, I am still VERY nervous about the move and leaving my 'home', I know it will be a great move for our family! As long as I can get my crap together in the mean time! :-)

omg! im exhausted after reading this post... i can only imagine how you feel ;) we closed on a house on friday! very exciting!! congrats :)
xoxo
ellen
thishive.blogspot.com

i seriously can't get over how much your furbaby and mine look alike.

and i agree with ellen above me. i feel like i just did my cardio for the day reading the things you did!

So excited you guys have closed! Looking forward to catching up with you tomorrow!!