'operation get rid of paci'

So we started it... 'Operation Get Rid of Paci'.

Remember this picture from our Arkansas trip? {And do not mention the red skinny jeans with pink rain boots and a pink hat! those were her choices. :-)} 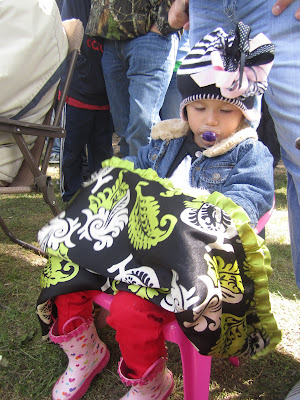 See... after being on the road and constantly 'going', Hadlea was smooth worn out! By Sunday, she didn't know if she was coming or going, and frankly, I was tired of listening to her whine. {and yes, I am just keeping it real here!} So I let her keep her paci ALL. DAY. LONG.

I got asked 5 times how old she was on that Sunday. Not once had anyone asked how old she was the two previous days... so I know it was because of the paci. No one really cared, they were just judging because she had a paci. And frankly, I don't blame them. I have judged LOTS of parents that are carrying around older 'looking' kids with pacis. I guess it was just my turn! Ha!

So on the way home from Arkansas, Justin and I decided that we would make no plans for Hadlea this weekend and start our hardest parenting operation to date.﻿

I have been really excited to start this all week. I know it is time. She is SUPER attached, but it just needs to happen. And... I guess I was just thinking I needed a true emotional beating! And as bad as 'I' think this sounds, this is the TOUGHEST thing I have done as a parent. There are so many parents out there facing real life issues, and I am complaining about taking a pacifier away... It kind of seems minor when looking at it like that, however, I knew this was going to be a major life change for us!

Come Thursday morning, I new we were going to start it. I had read many reviews and talked to many of my friends that had paci babies. I decided to go with the whole 'cutting' of the paci... and just tell her it broke.

After dropping Hadlea off at daycare that morning, I started thinking about Thursday night and future nights to come... would she stop sleeping her 12-14 hours at night and become a total bear? will she hate me? will she start waking up several times during the night crying for her paci? will she hate me?  ... obviously I was more concerned that she would totally resent me by doing this, but I just felt like it was our time to do it... and after all, I didn't want to be 'judged' anymore at future fishing tournaments! Ha!

I walked right into my house after dropping her off and seconding guessing myself and cut the paci! I wasn't giving myself any time to back out! 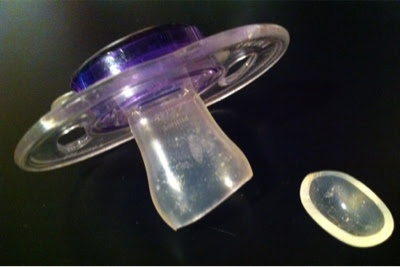 I might have also thought several times during the day that I was going to vomit. It was our last paci. I knew once I started that I couldn't back out... but what if?! What if she really hated me?

Thursday afternoon, Hadlea had a school play (another post to come on that). Nana went with us and then came back to the house to stay with Hadlea while I went to get my hair cut. I was nervous the entire time I was gone. I knew the outcome wasn't going to be pretty. 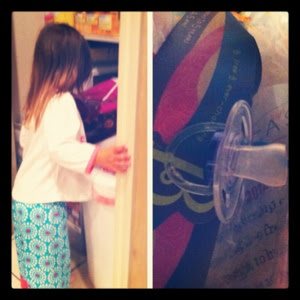 I gave her the candy and thought, "no way, it cannot really be this easy!". And then she started crying. Hysterically. She can to the trash can, got out her paci and threw away the candy.  She kept telling at Justin and I to "fix it" or "get a new one". My heart was breaking with every single word that came out of her mouth!

I then loaded her up and took her to her room. I started our nightly routine of kissing, hugging, talking, laughing. And it wasn't until I started singing her songs that she freaked again... and this time it would last 30 MINUTES! She was crying, I was crying. She was arching her back. (Side note: since I cut the paci, it was like sucking through a straw so she couldn't keep it in her mouth. she tried no less than 100 times to get it to stay in her mouth with no success. and with each try the crying got worse!) She was hitting. She was trying to bite. I mean... IT WAS AWFUL! We spend so much time as parents trying to make our babies happy, and this one time there was nothing I could do. I SO wanted to drive 5 miles down the road to Wal-Mart and buy her a new one. But I know I couldn't.

I told her if she tried to bite or hit one more time, she was going to bed alone. And of course, she did. So I put her in her crib and walked out. Walked straight to my husband and cried right along with her. I gave her a couple of minutes to cry and went back in. I rocked her maybe 2 minutes and she was sound asleep... 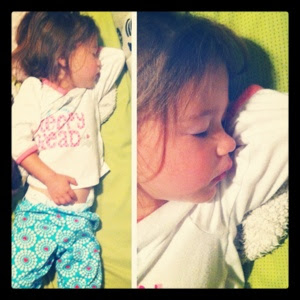 I was still up at 5AM... just watching her monitor and waiting... knowing that any second she was going to wake up and FREAK out that she didn't have a paci to sooth her back to sleep. I really think I just wanted her to wake up so I could hold her because I still felt SO bad! She woke up a couple of times, looked around and laid back down, putting herself back to sleep... not even looking around her bed for the paci.

I went in at 830AM to wake her up. She was in a great mood the first 30 minutes until she asked for her paci. Once she seen it, she whined a little, we talked about the night before and she was done. We got dressed, had breakfast and went off to school....

Sooo.... will night #2 be the same?! If the 30 minute crying sessions get shorter every night, I think I can handle it. This too shall pass, right?! We shall see...

{and sorry for the SUPER long story, but I am sure I will be doing this again with baby #2 that is NOT on the way (just to clear that up) so I wanted everything documented! hope it wasn't too boring! :)}

Just reading that made me sad so I can't imagine how you felt! My little cousin was in love with her paci as well. To get rid of it her parents told her that Santa wasn't going to come unless she gave him all of her paci's! She happily handed them over to her parents to give to Santa!

Good for you for being the strong mommy! That sounds like such a hard night. I think it's worse when they can talk and say exactly what's making them sad!! Tonight will definitely be better. Glad she slept well last night. :-)

Ugh! That had to have been so hard. Honestly, it was probably much harder on you then it was on Hadlea. Presley never took a paci, so that's one transition I won't have to deal with. However, I'm determined this next baby will, lol, so I'll be taking notes from you. I hope each day continues to get easier. Keep us updated!

My daughter Keaton never really liked her paci, but at 16 months we are struggling with ditching the bedtime bottle and getting her to sooth herself to sleep. It's a little bit different situation but I totally feel your pain.

I know this is an older post but I had to comment! Colt is 2 now and he is obsessed with his paci. Has to have it ALL the time. Im dreading the day I have to take it away, which is why I will probably let him go to kindergarten with it!

ok probably not, but still...