When I wrote THIS post on Friday, I was obviously emotional and very sleep deprived! I definitely require more than 2 hours of sleep a night! Ha!

I was completely stressed out on Friday. I just KNEW Friday night was going to go the exact same way Thursday night did... but man was I wrong! We talked about her paci several times after work and daycare... we discussed that it was broke and that she would soon have to throw it away. Once she went to bed on Friday night, she did around 2-3 minutes of whining. No major crying. No tantrums. No hitting or biting! I mean... almost a complete 180! We let her keep her paci and take it to bed with her. She just held it in her hand.

On Saturday, we made a last minute trip to the zoo (more on that in another post). After the zoo, I asked her if she wanted to go get a sandbox for her backyard. She loves to play in the dirt and dig around with sticks, so I knew this could possibly act as a trade.

Just so you know... I HATE sandboxes. I have told Justin time and time again that we will NEVER own a sandbox. I think they are gross and that sand sticks to EVERYTHING! But like all of my other 'awesome' parenting skills, I pretty much eat my 'before becoming a parent' words on a daily basis! Ha! So... off Hadlea and I went to Walmart for a sandbox... and of course, she chooses colored sand, Pink AND Purple... 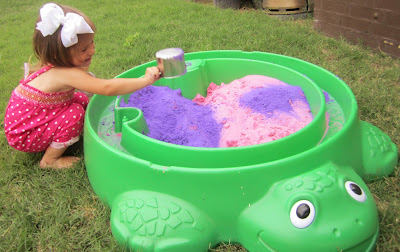 Before she was allowed to get in the sand, she had to go inside, get her paci and throw it away in the trash outside. I decided on the outdoor trashcan because I was afraid she would think of her paci every time she passed the kitchen trash... seems dramatic, but hey, I was trying to remove every possibility! 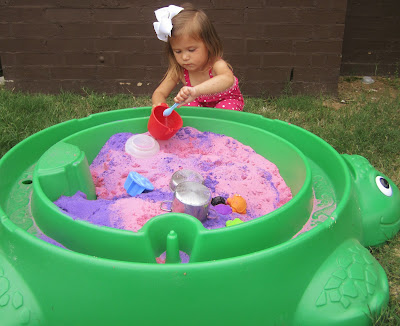 And obviously since she is playing in the sand, she had no issues throwing her paci in the BIG trashcan! See for yourself... {and please do not mind my super mommy voice. sigh. why do i talk like that when i know i am filming?! ha!}

And want to know how night #3 (Saturday night) went?! Perfect! We again talked about why she threw her paci away and off she went to bed! And I do not consider all of my stressing a waste in the least! I will stress for 3 days anytime, if making a major life changing transition goes that easily!

My only other issue... she might have sucked her thumb to go to bed tonight (Saturday). I was watching on the monitor, but I couldn't see her face that well... so here's to prayers that we will not be breaking a thumb sucker in a few days! :-)

Thanks to all of your for your comments, thoughts and prayers! You all are the best!

What a big girl - go Hadlea!

So glad the past few nights have been easier. :-)

Congratulations! I'm already worrying about getting rid of the pacifier. It sounds like your technique worked well :) I like the idea of saying it's broken and getting rid of it. Thanks!

WOW!! i so need to start this with Avin.. she is in love with hers and I am soo scared to try and take it away!!