Hadlea's daycare had their spring pictures today! Of course, I remember the day before and had to throw something together. Thankfully, Gigi had sent us a few outfits awhile back. They looked so big on the hangers that I assumed they were too big for Hadlea. Ummm... wrong! When did my baby get so big?!
She was SO proud of her dress, but more than anyhting, her boots! One of the daycare teachers, Ms Kelsey, often wears boots so she knew Ms Kelsey would love them! She couldn't wait to get to school to show her! 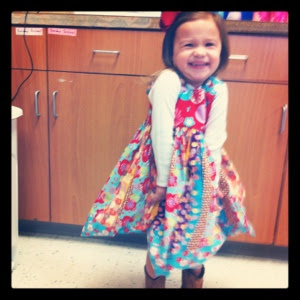 Ms Kelsey sent me this picture when Hadlea went to visit in her classroom. Again, when did my baby get so big?! Geesh! 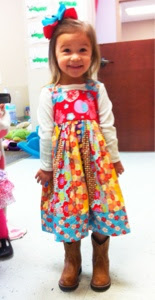 I received text messages from Ms Adrian (her actual teacher) and Ms Kelsey that Hadlea rocked her pictures! I cannot wait to see them!
And thanks for the messages on yesterday's post... I got a call a little after 2PM yesterday from the daycare saying Hadlea had been bit another child. I was a little confused as to why they were calling me. She has bit and has been bit several times in the past. I did receive a call one time to come get her once she bit 3 times in one day, but I had never received a call saying she was bit. They told me it was bad. I asked if it broke the skin, to which they said no. So I kind of blew it off, thinking they were just taking extra precautions. The daycare teacher that called is new, so I assumed she wasn't used to the biting! Ha!
I arrived to pick her up around 5PM. I had kind of forgot about the biting. When I walked up, the teacher said, "if the bite is still swollen in a couple hours, go ahead and ice it a little more". When I looked down at her arm, I am pretty sure my heart stopped and my blood started boiling. I couldn't really say anything because she has bit a few other kids pretty bad in the past, but nothing like this.
I asked what happened... I guess the kids were getting ready for reading time when J (the kid that bit her - and no, they didn't tell me who it was, Hadlea did!) sat in a chair that Hadlea wanted. She pushed him out, he pushed her, she pushed him again so he bit her. So... what do I really say to that?! J did have to set in timeout and I know they sat them both down for a 'talking'. It is so hard as a momma to realize that kids are kids... and karma will come back around! Ha!
The bite didn't seem to bother Hadlea at all after we got home. She never even talked about it. The picture I posted yesterday was taken 5.5 hours after it happened. This morning, the marks are still there. I really cannot believe that it didn't break the skin!
I guess maybe she will not be biting or pushing kids out of chairs anymore?! ... errr... or hopefully!