We had another jam packed weekend. Like I said in a previous post, our cousin's from KS came down for a visit. Justin and Aaron went hog hunting for the second time, and Anna, Harvey, Zac and Hadlea played and played... and Anna was sweet enough to help H get all dressed up in her princess gear! 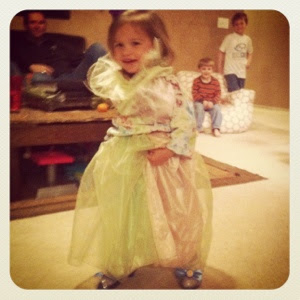 We spent all Saturday morning at home playing, got around for lunch and then made a Dollar Store run so all of the kids could get a couple of toys! Hadlea was bound and determined to get whatever Zac was getting (a calculator. ha!) but then settled on a stuffed Easter rabbit and a scratch pad. I always think it is funny to see what kids pick out when they can have anything in the store! Funny to just watch their little wheels spin!
After the guys got back from hog hunting, the Madera family stopped in from Arkansas. They were in town looking at houses! They could possibly be moving here... *fingers crossed*!!﻿
And after they left, H, Daddy and I went to eat and then made a Lowe's run. H loves to 'drive' the carts around the store! {Side note: Expect LOTS of braid pictures from this weekend! H is into having her hair braided. EEEEKKKK! I LOVE it! She is great at sitting still long enough for me to do it. Let's see how long this lasts!} 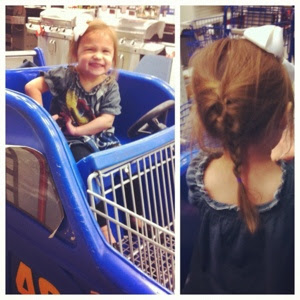 Sunday morning we got up and ready for church... rain boots and all! I picked out some brown boots for her to wear, but she said they did not match her pink skirt. Hmmmm... I LOVE that she knows her colors now... I DO NOT love that she is starting to 'demand' her color choices to wear! 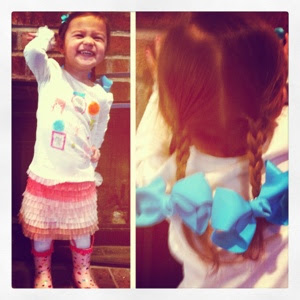 Do you ever take a picture of your child and KNOW they were meant to be yours?! I was SO made to be a momma of a baby girl. So THANKFUL the good Lord knew I needed to be this baby girl's momma! 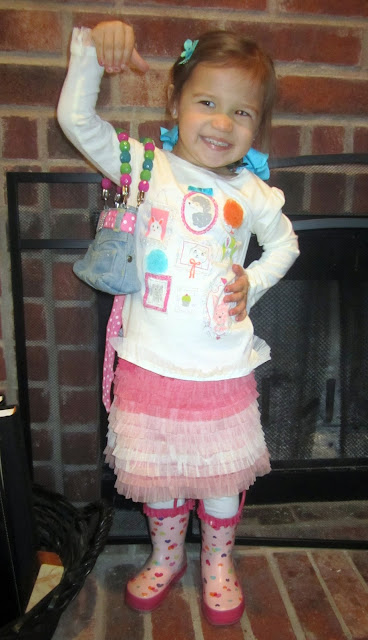 Daddy had to go work on some OmniLifts so H and I headed to lunch and then to Maddie's 2nd birthday! It was a small party at the Roumbanis' house. It was only Jackson, Maddie and Hadlea. After having Hadlea 2 very large parties, I am seriously thinking about a small kids only party next time! It was awesome! They had the best time! {And Julie is supermom for letting them blow bubbles all over her house!} 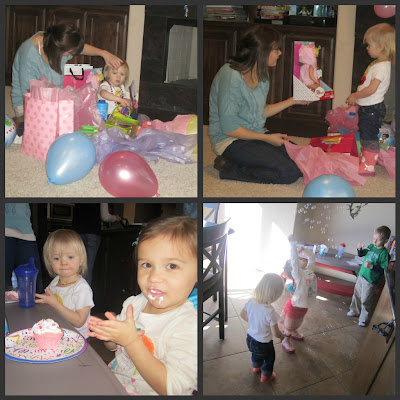 Once we left the party, we swung by the house, picked up daddy and headed to the circus! 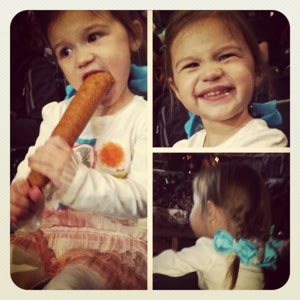 We got to the circus a bit early and let Hadlea ride an elephant. And to say she LOVED it would be an understatement! She has asked to ride an elephant every single morning since. I have told her several times that it would be a while before we could ride an elephant again. Her response, "a tiger"?! Ummm.... NO!! We tried to get her on a camel just a few months ago and she screamed bloody murder! I do not know about you, but I would so rather ride a camel than an elephant! I have a feeling we will be finding elephant rides for a few more years!

We got in late from the circus, did bathtime/bedtime, daddy and I watched a couple of shows, and then we all did this! Pretty sure we all felt just like Berkley... worn out! 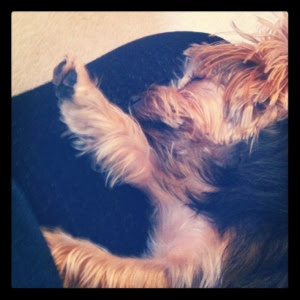 We seem to love BUSY weekends around here... but when you get to see so many friends and family in one weekend, it is definitely worth it!