For the last month or so, it has felt like Justin has been working a second job... which is kind of true seeing how he is getting paid! Yeah! However, this wasn't a 'planned' second job, and as far as Justin is concerned, this is FAR from being a J-O-B!
For those that do not know, Justin is an electrician. For the last 9 years, he has been contracted to a hospital here in town where they complete remodels. And yes... this place does one remodel after another! It is CRAZY!
If you have been following my blog for anytime at all, you know that Justin LOVES to fish and pretty much does it every other weekend, if not more. It is his passion. And I LOVE to support him in it! As long as it doesn't affect my lake time in the summer. And that is not a ha-ha just kidding joke either! That is in all seriousness! :-)
I am also sure you have heard me talk about the Roumbanis family in the past. Fred Roumbanis is a professional fisherman. Justin has watched him fish for quite some time. I took it upon myself right after Hadlea was born to hunt Fred down and try to get Justin a daily fishing trip with him. You can read what happened HERE, HERE and HERE. Obviously it happened, and we all have become fast friends! They are just really great, down to earth people. I am very thankful to have met Fred's wife. She has became a great friend!
So I say all of that to say that Justin's degree and years of experience as an electrician have paid off and come full swing. He is now completing the wiring of a new lift for bass boats. He is actually using his degree to do what he LOVES! You do not hear that very often! Ha!
Fred was approached about this new product and was asked to be the spokes person for it. However, the one thing keeping it from taking off is they couldn't find anyone to wire it. Enter Justin! :-) Fred gave the people Justin's name, Justin was contacted and the rest is history!

The OmniLift is a lift that will lift your trailing motor (little motor on the front of the boat) in and out of the water without any manual labor! 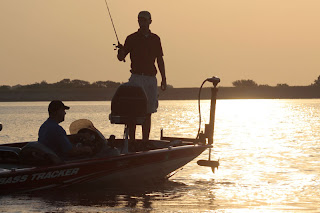 You can watch Fred's video about the OmniLift HERE. {Justin was there when this was filmed. They interviewed him regarding the physical parts of the device, however, that didn't make the interview. None the less, I know he is standing right beside the camera man smiling ear to ear! Ha!} He sent me this picture while it was being filmed! 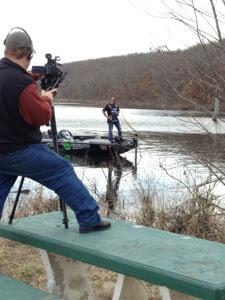 You can also check out OmniLift HERE.
I am always getting pictures from Justin late at night like this... stuff torn apart on some one's boat and him trying to get it all back together! 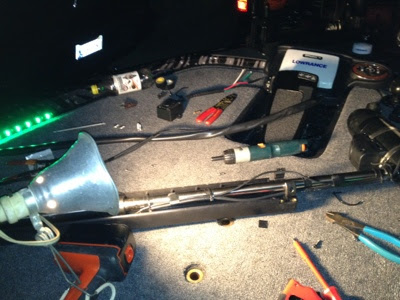 Justin is LOVING this new adventure, and we are so curious as to where it could take him! This product is SO new, and it seems to be getting great reviews! I am just so happy he is getting involved in something that is very true to his heart! He is going to start working boat and tackle shows to get the product out there for people to see. His first show is this weekend! I cannot wait to hear how it goes!

Congratulations! That's awesome! I like when I hear about people who actually get to do what they love :)

How exciting!!!! Congrats!!! I know my hubby's and father in law would love the omnilift!

Hubby. Just wanted to clarify; I've only got one.

How cool is that?! So fun that he can use his skills and apply it to his passion!