We celebrated Christmas with Justin's family at our house. We got Riley and Hannah the night before so they could spend the night. We went out to look at Christmas lights and then stopped at Cherry Berry for yogurt. It was pretty empty... after all, who goes out for yogurt when it is 30 degrees outside?! Ha!
The kids were SO good! Ry and Hannah are just so good to go along with whatever Hadlea wants... or when she wants to do whatever they are doing, they are so good to let her or help her! I swear, I would take those two kids in a heart beat... Aunt Les, wanna ship them to live at our house?! :-)
After lights and yogurt, we headed home for bathtime! Hadlea was IN HEAVEN playing with Hannah! Riley opted for his own bath, of course! Ha!

After bath, they wanted to open one present. Lucky for them, Alan and Amanda had sent presents over for them. 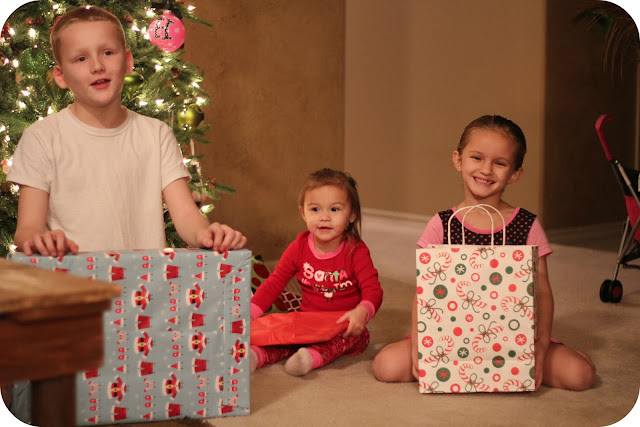 LOVE this picture! More proof Hadlea thinks anything those kids do is just AMAZING! Ha! She was more concerned about their presents than her own! 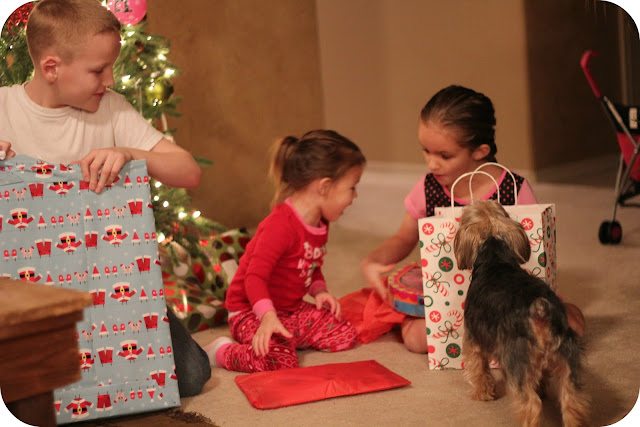 After presents and a few games, we were all off to bed.
Hadlea woke up the next morning yelling, "Wiley, Hannah where are you?"! And they were off to get her up! After some jumping in the bed, of course! 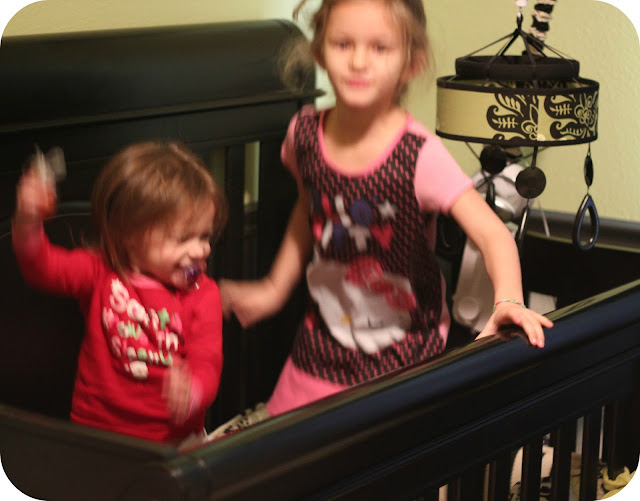 Our bed became a trampoline that weekend! I think about 3 hours of the day was spent jumping and wrestling in our room! 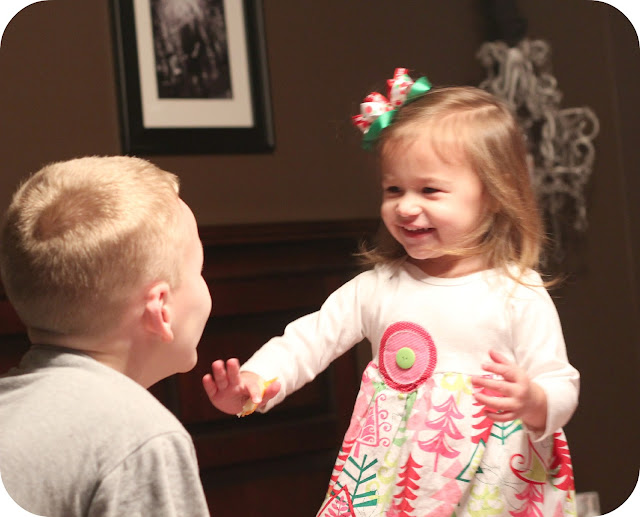 The rest of the family made it in that afternoon. We ate some dinner and then opened gifts. The kids all got some SUPER fun stuff! We gave the kids our old iPhones! I think they were a hit! :-) We downloaded all of our games and music on them... the house got quiet shortly after that! Ha! 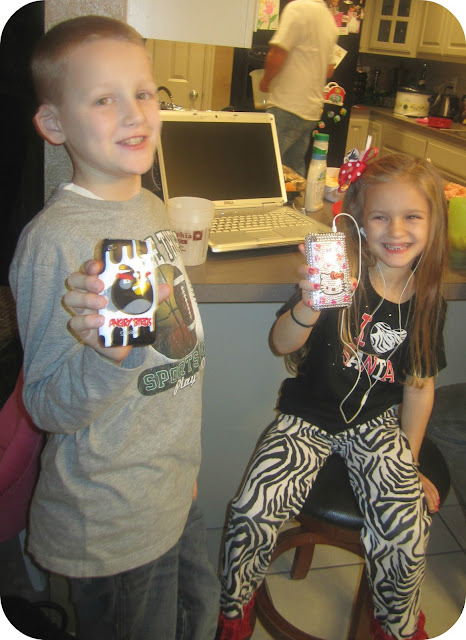 Hadlea got a new tent and Berkley got some sun glasses and a Dallas Cowboys visor! Someone knows me too well! Thanks, Donna! :-) 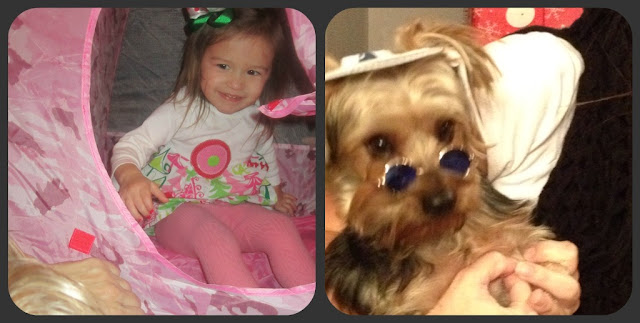 our family with riley and hannah! 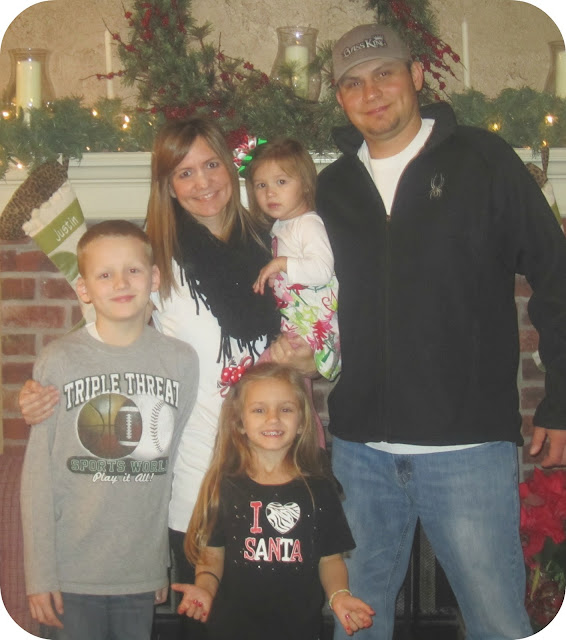 nana with her babies and grand babies! 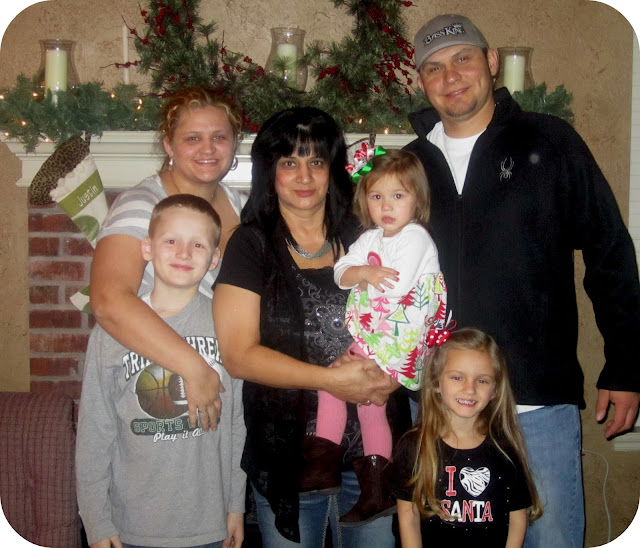 hadlea's super cute clothes! she also got a new pair of cowboy boots to go with all of her denim! 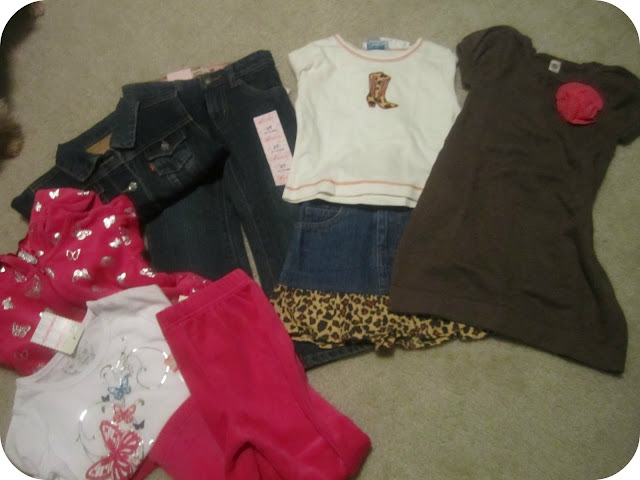 and a trampoline from nana and rusty! I need to do a separate post about this... I think that girl is going to be a jumping machine! She LOVES it! 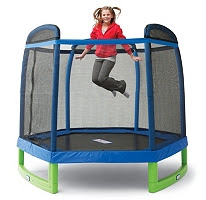 We had an AWESOME Christmas with Justin's family! So thankful I married into this family! They definitely spoil us!