Friday evening, we had friends over to cookout. G, Taran, Trevin and Raelie all came over for dinner. Hadlea and Trevin are starting to interact more and more. They are constantly doing something to make us laugh!
Saturday, daddy had to work for a few hours in the morning. Hadlea and I got up, had breakfast and then went to run some errands. First stop, oil change! ...where they gave Hadlea everything she wanted while we waited! Nothing like popcorn and a sucker right after breakfast! Ha! 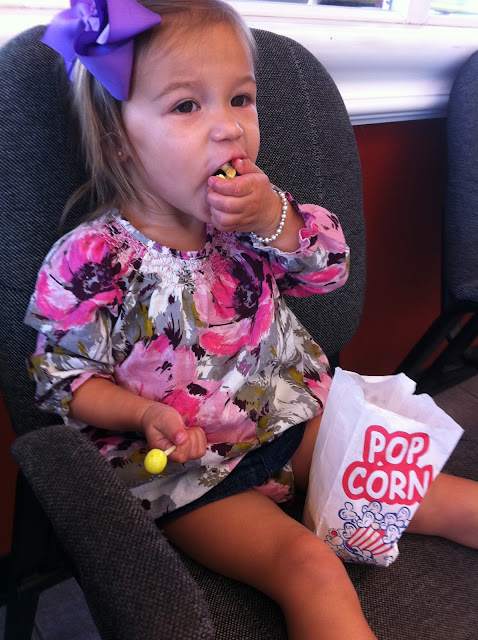 Daddy got home shortly after lunch so we headed out to try and get some pictures of Ms H! You can see a couple HERE. I had bought this outfit earlier this summer, and I have been putting off taking her pictures. It is more of a chore sometimes because she will NOT sit still, but it is SO worth it to see the results! {I will be using all of the pics for Hadlea's 21 month post, so stay tuned...} 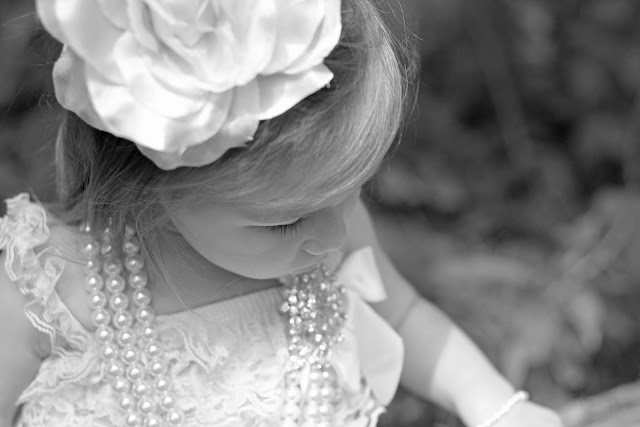 After pictures, we went home for nap time, but Hadlea had other plans... no napping! So we all got ready and headed to the Roumbanis house. A town near by was having a block party so we went to check it out! I guess since we got there early, it wasn't crowded so the kids got to jump and slide on the inflatables until their little hearts were content! 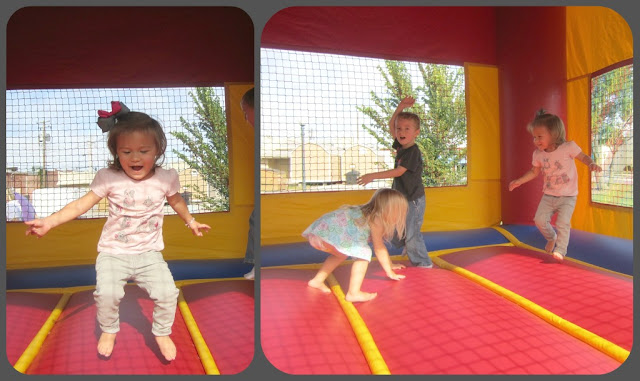 Then it was back to their house for a cookout. Hadlea and Jackson played in the backyard while we cooked dinner. {side note: I LOVED Hadlea's outfit. Gigi bought this for her back in OKC one weekend. She has no bottom, so I think skinny jeans make her look even smaller. Just so adorable!} 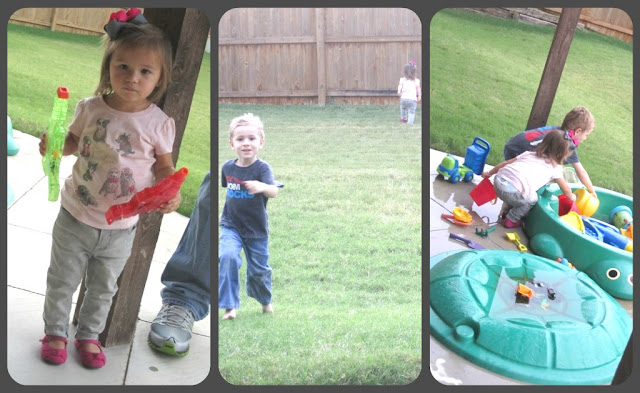 We had a great day/evening with the Roumbanis family. This was our last day as a combined 6 because on Wednesday, Mr Avery William will be entering this big ol' crazy world. And we CANNOT wait to meet his sweet face! I know his momma is counting down the seconds!!
Sunday morning, daddy went fishing for a few hours so Hadlea and I got up, had breakfast and did a little crafting. Obviously by the middle picture, you can see Hadlea dressed herself after getting out of bed! Ha! And by crafting, I mean we made birthday cards. We have TONS of birthdays coming up!

After breakfast and crafting, we played outside. Baby is still doing everything she does... swinging and sliding! 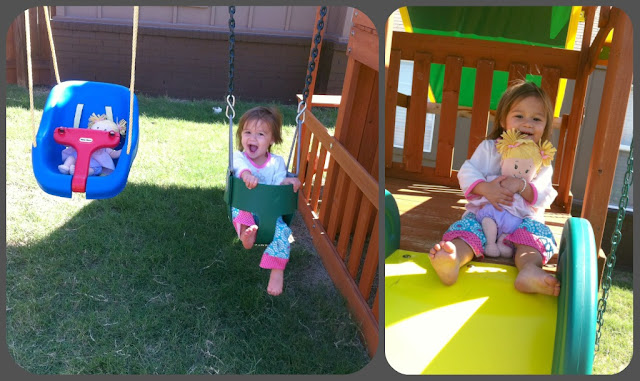 Nana and Rusty were going through town that afternoon, so they stopped and picked up Hadlea. Justin and I had an awesome afternoon of buying groceries, church and going out to eat. I sometimes think Justin and I should film our conversations when we are alone because they get crazy and just make me laugh. He really is my best friend. And even after just a few hours alone, it makes me so thankful that God put him in my life. There is just no one in this world that understands me like he does... and there is no one in this world that would put up with him like I do! Ha! :-) JK
We went to go get Had after eating. When we were about to leave, Rusty decide to measure her hands and feet in the cement from when they built their new house. This was in March of 2010. She was 3 months old. I cannot believe the difference in the size of her feet. She is already wearing a size 6 shoe. Her hand print, you can barely see. It is to the left of where her hand really is, but you can definitely tell it is bigger! 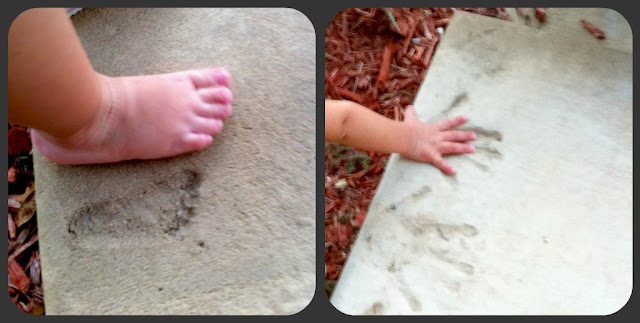 Once we got home, it was bath time, story time and then bed time. We had such a great weekend of hanging with friends and watching TONS of football. Man... I LOVE fall!

The pictures you took are amazing! She is seriously so adorable!!