We had a really great, FULL weekend! Friday evening, we met some friends at a new pizza place. It was delish! ...and there drinks were twice as wonderful! :-)
I dressed Hadlea in a Juicy outfit I bought when she was super small. I bought it on sale so I have been saving it for quite some time.  It is a 3T, but I thought it looked small so I tried it on her... thankfully I did. It barely fit. I had to cut some of the straps to get it on... But OMGeee, she looked adorable!

Before we leave the house, Hadlea always has to give Berkley a treat! She takes her job VERY seriously! Ha! And she always claps and says, "good job bubba"!
At the restaurant, they give the kids dough for something to do while waiting on their food. She had so much fun playing... and then couldn't wait to watch her Blues Clues and eat her rolls! 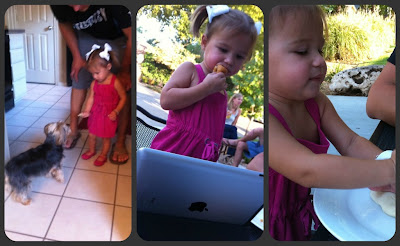 Saturday morning, we went to the boat races. Justin's friend, G, races so I was excited to watch him race.... someone was just excited to be outside by the water! 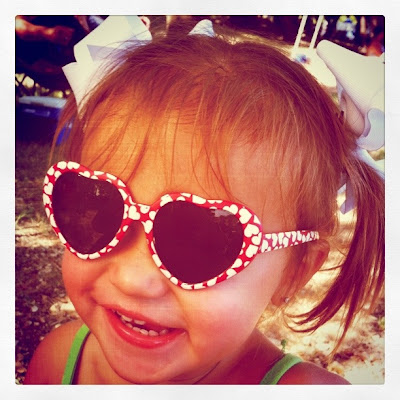 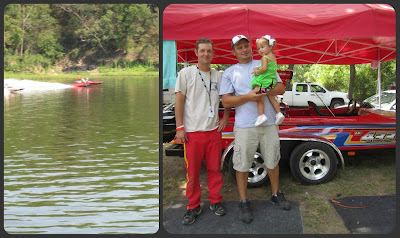 watching the races with her babies

The boats are very loud, and Hadlea wouldn't keep ear plugs in so we had to cover her ears with each boat that raced. After a while, she would do it on her own! {and don't mind the paci, by this time it was 6pm, she had no nap, it was 100+ degrees and she was TIRED!} 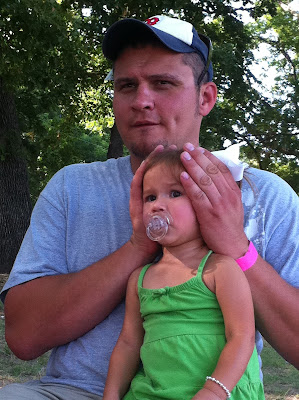 G ended up placing 3rd. He did great!
Sunday, we got up and went to church, out to lunch and back home. Nana came to pick up Hadlea and take her home for a few hours. Riley and Hannah got to go too, so she got in some cousin time... which she no doubt LOVED! After being at Nana's for a few hours, Hadlea started to run a fever and was pulling at her ears again. Grrrr.... I am SO over ear problems. But after a couple of hours, she seemed fine, other than a runny nose.
Hadlea does not want her tray on her high chair anymore so I bought her some plates and she is now sitting in her high chair, but eating at the table. She is loving it... and makes sure to tell mommy and daddy exactly where to sit too! :) 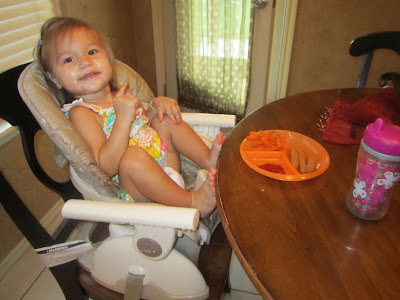 after dinner, we spent some time coloring. 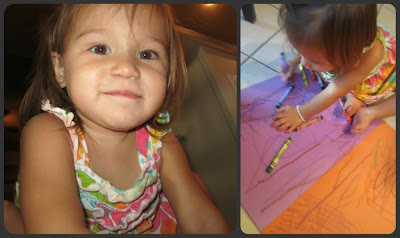 Berkley decided to take a nap on one of Hadlea's babies. Sweet baby boy! 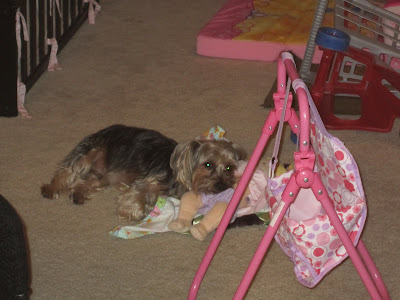 Monday was work, daycare and then home to play! One of Hadlea's favorite things is sitting in the refrigerator. No idea why, but she loves it. And I will pretty much let her do anything while I am cooking... she is easy to control when she is just sitting.... ha! 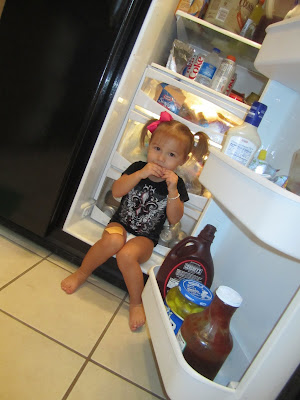 After dinner and bath, daddy decided to mow. Hadlea wanted to watch her daddy so I stood her in a chair and we watched for about 30 minutes. She thought daddy was so funny when he would walk by and wave... this girl LOVES her daddy! 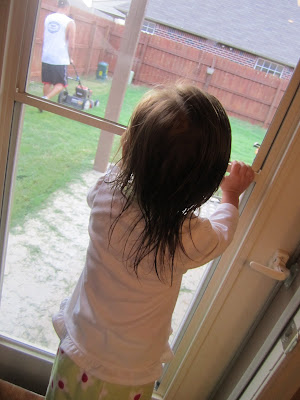 We had Little Gym tonight and have a busy rest of the week so alot more to blog about!