This past Sunday, Justin, Hadlea and I went to St Johns Hospital to visit Justin's aunt who is in ICU with kidney failure. It is a very sad situation, so please say a prayer for their family!
We happened to park on the same floor of the hospital where Hadlea was born. After visiting some of Justin's family, we were headed back to our car and I told Justin I wanted to stop by the nursery to see if there were any babies. There were a couple, and Had was so excited to see them!
Hospitals these days just make me too sick. Jake's accident just about did me in with ever wanting to be around a hospital again! The thought of anyone in my family ever being in that much pain again is just too much to bare sometimes. So with already being in the hospital and then walking past the very special care nursery room where Hadlea was her first 3 days of life just became so emotional! I couldn't help but break down in tears! ...which my husband thought was completely CRAZY! :) Men!!
Anyway, after sucking it up, I had him take a picture of us in front of the room where we watched her lay for 3 days... hoping and praying she would start regulating her own temperature, oxygen and sugar. 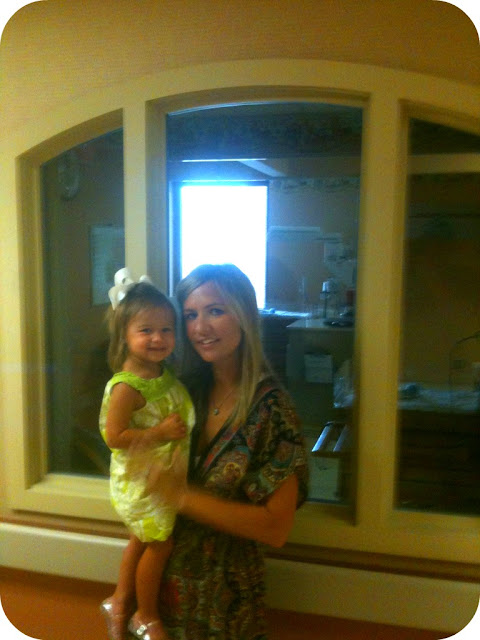 I cannot believe how fast the last 19 months have been... just seems like yesterday we were all sitting in a room staring at this... 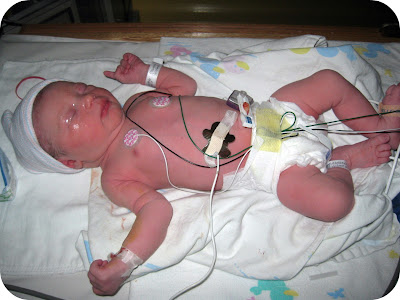 And I was BEGGING every.single.second to do this... 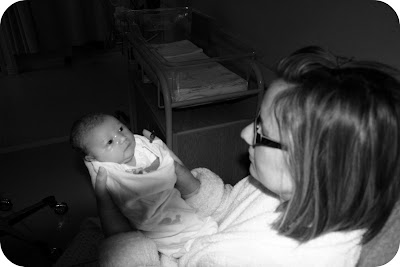 hold my sweet baby girl! I did finally get to hold her for more than a few seconds that next morning! She was wide eyed and starting to come around! I just KNEW she needed her momma! Ha!
I think because I was so sick during delivery and with all of the medicine I had in my system (I had two FULL epidurals before I even had her which I do not recommend, I had 3 or 4 rounds of medicine to stop making me throw up and something else as Hadlea and I were both running a fever.), I don't remember much of the delivery or of my hospital stay. I have a few memories, but I definitely do not remember the entire stay. But I also thank God planned this. I was very calm about Hadlea being in Special Care and being sick. I think if I had been in my right mind, I would have been a basket case. The nurses and drs were so great to keep us informed, let us be around as much as we wanted and just kept us comfortable in knowing she was improving and would be okay!
It was definitely not the ideal birth. But 19 months later, I have the ideal baby girl... that even if I would have been praying for something so perfect, I would have never expected to receive the gift I did! She is beyond anything I could have ever imagined!