Last Friday, Hadlea had her first spring program at daycare! They sang If You're Happy and You Know It and Six Little Ducks! I was so curious as to how she would react standing in front of a large group of people! And it is safe to say I KNOW my little girl! They stood her class of 6 on the stage and it was like a bunch of deer staring into headlights! I do not think a single one of them moved! And towards the end Hadlea started crying, which led to another crying, and another... and you get the picture! Ha! It was pretty funny! But if nothing else, she definitely looked cute!! :) 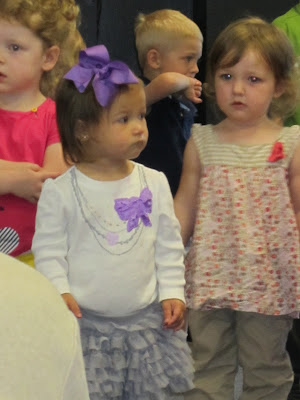 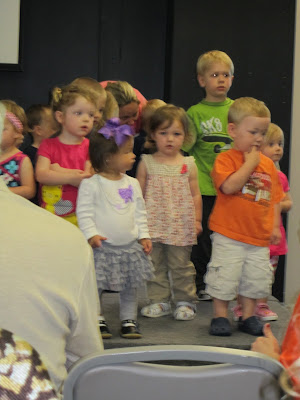 My sweet baby in tears! 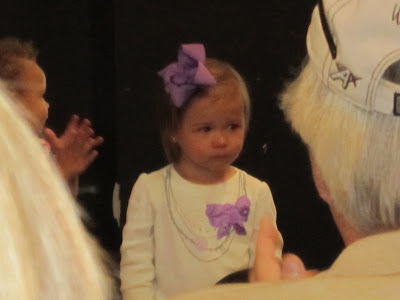 It was so hard not to go get her when she started crying! But of course, I didn't want to be the crazy mom charging the stage either! I was hiding behind people in the back so she didn't see me anyway! I KNEW if she seen me, it would be completely over!
After their first round of songs, they all loaded in the buggy and waited for their next next song.... 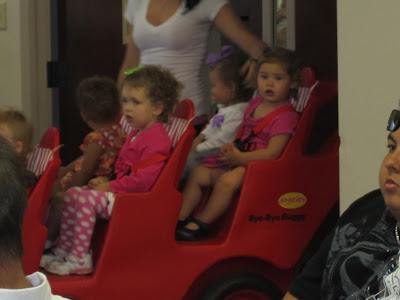 After all of the classes sang their individual songs, all of them got back on stage together and sang a couple more songs! Hadlea did MUCH better!
And I know these videos might not be interesting to anyone else, but the grandparents. Hadlea does eventually start bobbing her head at one point... which is MUCH better than crying! Ha!
I wish I would have videoed the 3 and 4 year olds! They were SO funny! They were doing all of their motions to so many Christian songs, and it almost made be cry! It was just the sweetest thing EVER! They were having so much fun on stage! I don't want to wish Hadlea's next couple of years away, but I cannot wait for her to be up on stage performing like no one is watching... well, let's hope she takes after me and not her dad. If she is anything like her dad, she will still be standing there with the same blank look! He's not a fan of crowds!! :)

She is SO cute....I love that little outfit!!