Friday after work, Justin, Hadlea and I headed to Andy B's to meet up with G, Taran and Trevin to bowl. Since Justin was fishing on Saturday, we wanted to take Hadlea to do something. Justin being the big kid he is, cannot go without playing the arcade games... which Hadlea and her baby couldn't resist either! :) 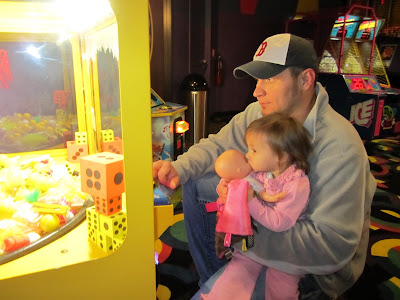 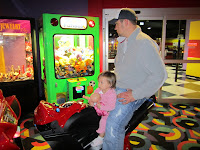 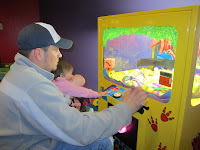 Hadlea LOVED to bowl. We put up the bumpers and got a bowling stand so she loved to push the balls off! 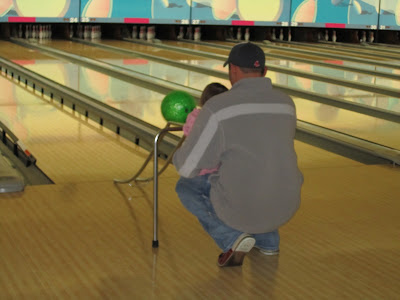 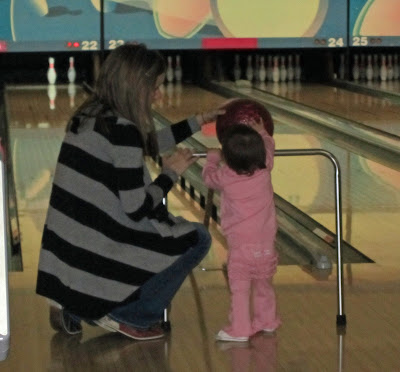 Hadlea, Trevin, Elmo and the baby having a snack! They were all both so good! It was pretty crowded, and I was afraid one of them would run in front of another bowler, but they stayed close to us and had a great time! Hadlea loved the music so she kept us entertained by dancing! 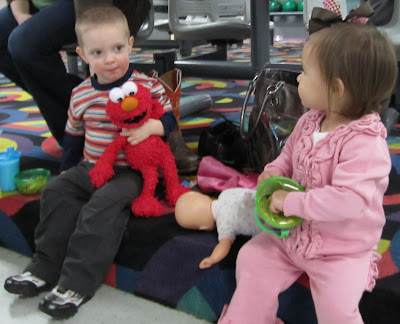 RuffleButts outfit! I bought this a while back and am so glad she could finally wear it! Our issue is becoming her legs... they are getting so long that her pants are getting too short, but her tops are too big! This is a 12-18 outfit and is already about too short! Yikes! 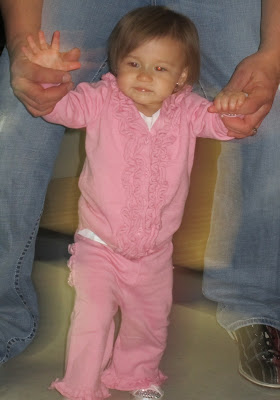 After bowling, we went to eat at Zio's but the line was crazy so we went to McAlisters for a sandwich. Hadlea didn't have a nap all day, so I was afraid she was about to break at anytime, but she was perfect!
Saturday morning, Justin was up and out to fish at 5AM... the rest of us were still sleeping... and trying to stay warm since it was under 30 degrees. Once H got up, she ate toast and jelly and an Eggo.. Yes, BOTH! She is addicted to Eggos! 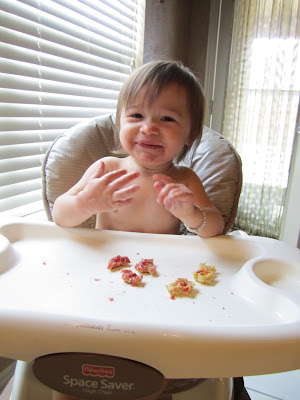 After breakfast, it was time to get dressed. She barked at her 'bubba' on her shirt no less than 50 times! She thought it was the greatest! 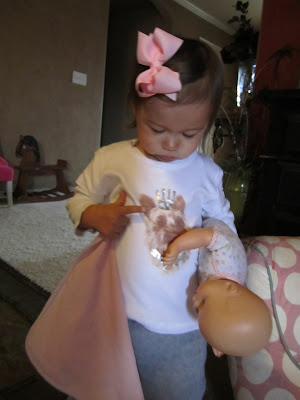 And then it was off to the bounce house! We met Jennifer over at Life with the Lebedas and her two girls, K and C. I went to high school with Jennifer, so it was great to meet and catch up... well, we tried as we ran after the girls! :)
Hadlea did so great! She is way more of a dare devil than I had imagined. She isn't scared of much, but I couldn't believe the way she was running around, running into things and... 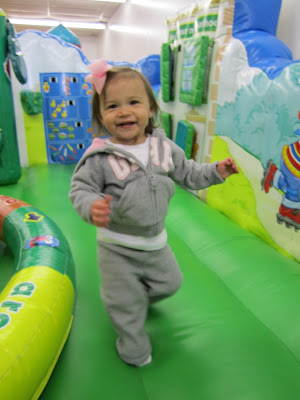 sliding! She figured out how to climb the smaller slide on her own. She could climb up, get her legs underneath her and slide! She was so much fun to watch! 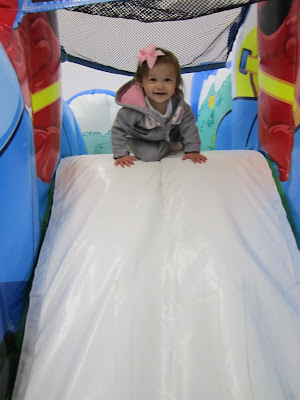 Sliding video!
She loved the ball pit too! 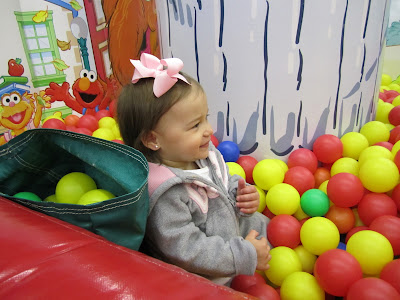 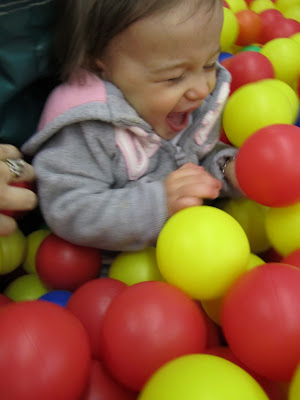 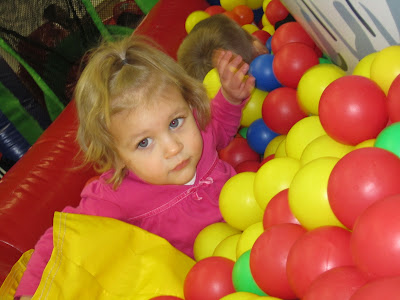 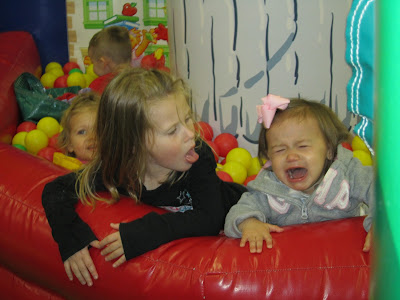 We had a great time with Jennifer and the girls! Hopefully we can have more play dates as it gets warmer!
I have a slight feeling that Hadlea isn't nice to the other kids at daycare. I am very afraid to ask how she is towards other girls. She pushed more than one little girl while we were there and also pulled another girls hair because she didn't want to wait in line on the slide. I was SO embarrassed! I also have no idea how to react. The first time, I about died and the second, I made her sit for a bit. She obviously doesn't do these things at home, but I guess I will start playing with her where she has to share. Mommas... feel free to leave any advice!
After the Bounce Barn, we headed home for lunch and a nap. Once Hadlea got up, we played for a bit and then headed to the mall to do some shopping! Right after we got home, daddy arrived with dinner so it was eating and playing before bedtime!
Sunday was church, grocery shopping and more play time! {NOTE: I MUST take a picture before church. H wore the CUTEST skirt, tights and shirt to church, and we were running late so I thought I would do it afterwards. But after, we went out to eat, and I didn't have a bib so obviously it got dirty! But it was SUPER cute! :) }
I am SO ready for the warm weather where we can play outside! Although now that we HAVE to carry TWO babies around, it is getting kind of crowded everywhere we go! Ha! 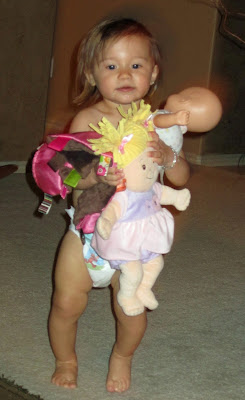 Both babies and H down for 'ni-ni'! 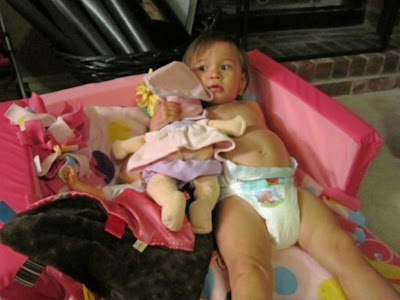 We had a great weekend! Justin and I worked on our taxes last night after H went to bed. They are off to the accountant and hoping we get a return! I think that is always better than Christmas for me... money I had no idea I was getting! Yeah! Fingers crossed...

Hadlea is completely adorable in her litte gap outfits! Don't worry if she is nice to other kids at daycare, I'm sure she is! They always act completely different whenever they are away from us! Lol, I know my girl does for sure! She is supposedly an angel at school, but I think they have the wrong kid. ha!

We had a great time too! H was great and hopefully C won't be as cranky next time. :( H is cute and I can't believe how much she's grown! Kinzley keeps asking if we can go play with her again. Cute pictures!!