snowed in with a houseful...

Thanks so much for all of the prayers for my friend's nephew! It is so awesome to have a prayer outlet to turn to when needed! His kidneys are improving. A few weeks ago, he had strep. Instead of his white blood cells attacking his strep, they attacked his kidneys, which is why he was showing signs of kidney failure. The spots around his brain were inflamed nerves between the gray and white matter of the brain. They are not sure of the cause of those. Please do continue to pray for Aden, his family and the medical team!
Tuesday evening, my friend Shannan and the girls, KK and B, arrived to see Aden in the hospital. Shannan's husband, Michael, flew in and Justin picked him up from the airport. We were so glad to have them all here, but not for the reasons they were arriving for! The girls got in alot of playtime in the mornings and evenings! We ended up getting another 5+ inches of snow Tuesday night into Wednesday morning so the Justice family was here until today, Thursday!
One night while they were at the hospital, H and I camped on her couch playing babies! 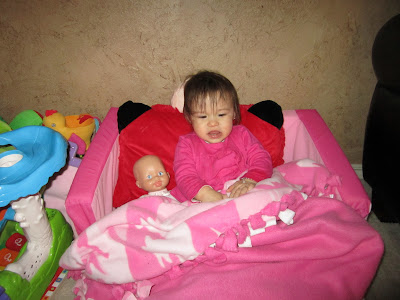 When KK and B were at the house, they were either pushing H in the car... 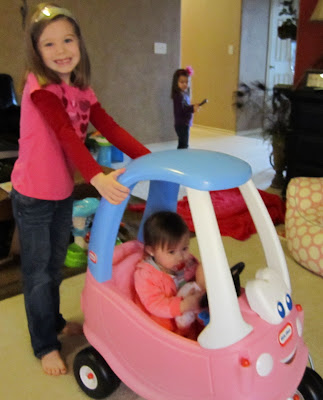 playing babies with her... which she might have been the baby... 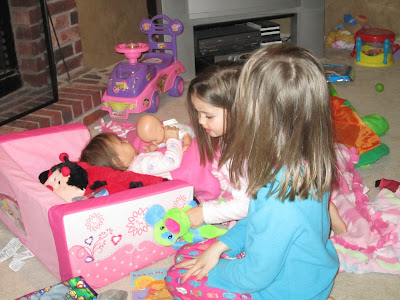 or she was being pushed in her baby stroller! KK timed her one day and pushed her around the house for ALMOST an hour! We told KK she did NOT have to push her, but she said she just wanted to keep Hadlea happy and smiling! She is just a perfect friend!

Berk got in alot of time with his girlfriend, Mazie! He has been worn out and sleeping since they left! 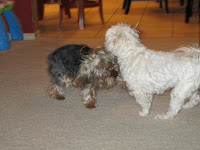 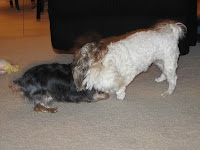 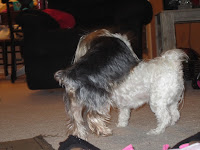 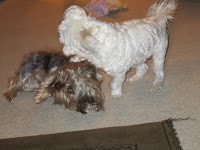 This morning, KK pushed H around for another obscene amount of time! H decided she would just have blueberry Eggo's for breakfast while being pushed around! 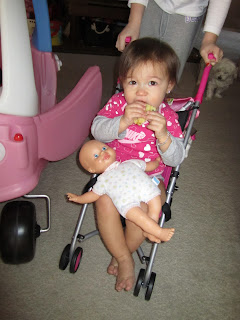 With 3 little girls, 2 mommas, 2 daddies and 2 doggies, we had a houseful... but I wouldn't want to be snowed in the house any other way!

glad you got to see your friends for awhile.. even under a rough situation. Glad they where there when you got all the snow to keep you busy while snowed in.