I sure wish I could think of catchier blog titles, but that is exactly what this is... a weekend recap! :)
Hadlea had to stay at home on Friday since she was sent home Thursday from daycare with a fever! Of all days for her to be home, it had to be the best! It was 70+ degrees... in January! It could not have gone more perfect! I got up early to start working before she woke up. Once she was up, I took her temperature and it was 102.7. I made an immediate call to my personal nurse, Shannan. She gave me her advice... a little Tylenol. I only gave Hadlea one dose that morning, checked it an hour later and it was down to 98.9. She was fever free the rest of the day! Yeah! After breakfast and a change of clothes, it was cartoon time. I will say 'cartoon time' lightly as I think she was actually watching a commercial here and then she was done! But how big does she look here?! yikes! 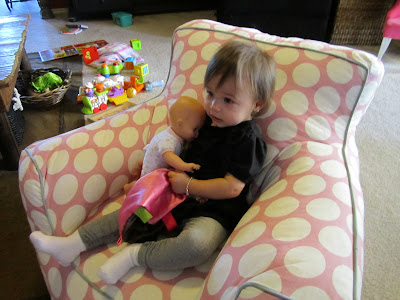 At lunch time, we got a visitor... Uncle Jake! How awesome does he look!? It just amazes me what they can do with surgery these days! And I know I have said it 100 times, but I am so proud of how my brother has handled his entire situation. Just crazy how bad a softball can bust up a face, but I think we have all come away with a different perspective on life because of it... and for that, I am thankful! 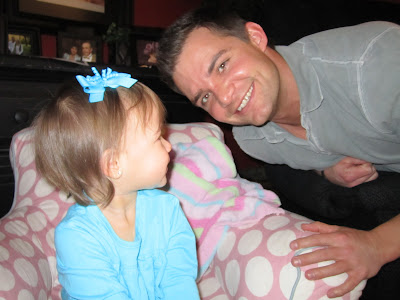 Uncle Jake didn't get to stay long before having to head home! It was great to see him even for a short time! He will be back in a couple weeks to stay a weekend with me! I cannot wait to have a night out with  my baby brother! 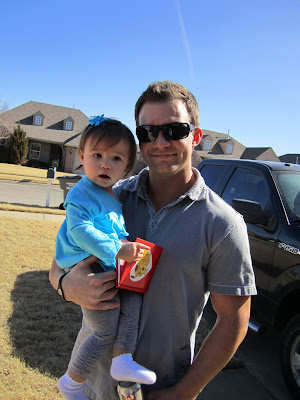 After nap time, we headed out for a walk! I couldn't find Berk's leash so he just got to ride in the stroller today. He doesn't mind as long as he is outside! H LOVES for him to ride with her! 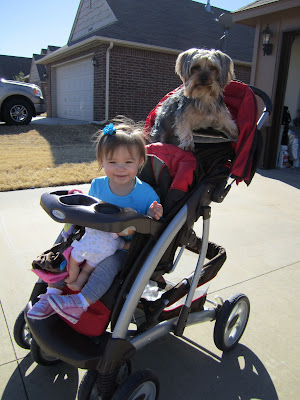 We spent so much time playing outside! So now, let's play a game... What is similar in all of these pictures!? 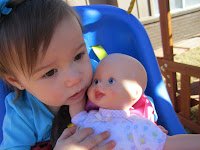 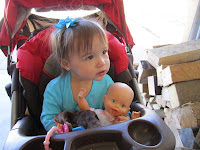 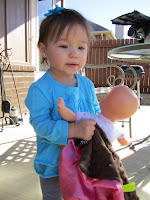 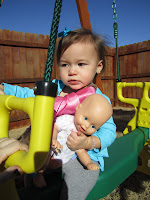 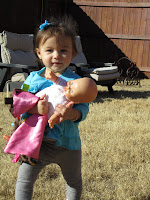 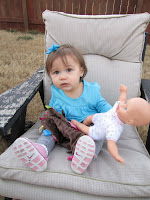 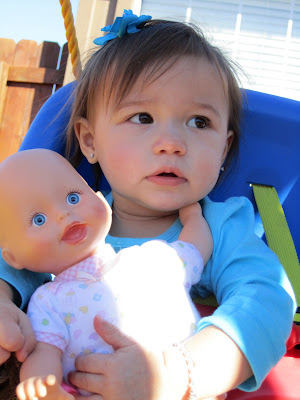 Can you tell we didn't go ANYWHERE without a certain baby!?
Oh this girl just cracks.me.up!
Once daddy got home from work, we spent even more time outside! We cooked out hamburgers on the grill... Have I mentioned how ready I am for summer...lake season, grilling out every night, fires, walks, etc. etc. etc!! 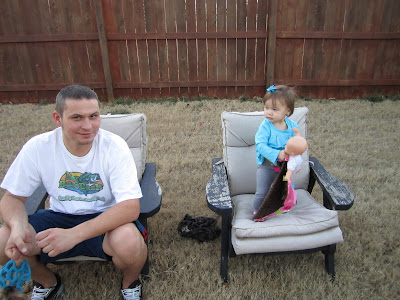 It started getting cool once the sun went down, but we were not done playing... we just had to bundle up a bit! And nope... we didn't forget the baby! Ha! 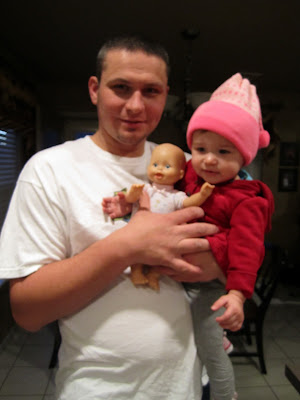 Saturday was another 70+ degree day! Justin left early to go fishing so baby girl and I got up, had breakfast and headed outside! The weather was so beautiful! Instead of going on a walk or playing on the play set, we went to the front yard. I hadn't really taken into account that Hadlea hadn't played much in the grass. Last summer she obviously couldn't walk so she had never really 'played' in the grass... she loved it! She would chase Berkley everywhere! 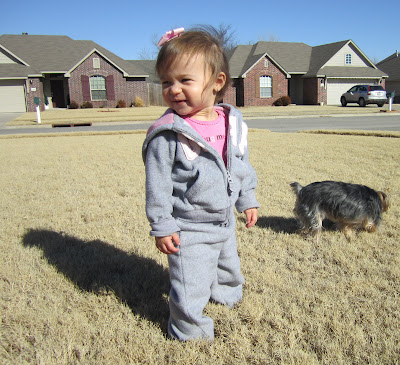 When she would fall down, she would get up, dust off her hands, say uh-oh, laugh and repeat! She thought falling down was REALLY funny! I got such a kick out of her just walking in the grass! Plus, she looked so adorable! :) 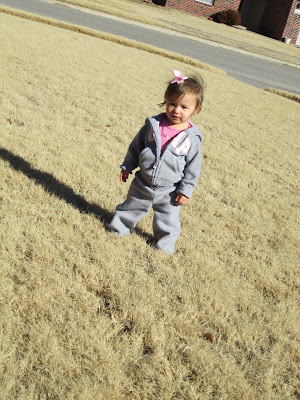 We needed to run a few errands before lunch so we loaded up. We were back in time for lunch and a nap, but after her nap, you bet we were back outside! ...more play time and a walk! 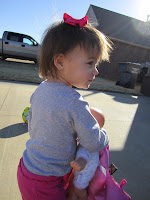 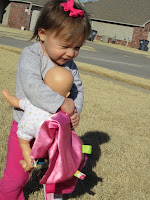 Justin got home around 4... in time to take a shower and all of us get ready! We were dropping Hadlea off with Auntie A and Uncle Alan to go to a KU {Kansas University} basketball watch party that Auntie A was hosting. If you know one thing about Hadlea's Aunt Amanda, it is that she is crazy obsessed with KU... CRAZY OBSESSED... it is almost scary! Ha! And you think I would put 'just joking' here... but no! It is that crazy! :-) So Hadlea got decked out in her KU gear... 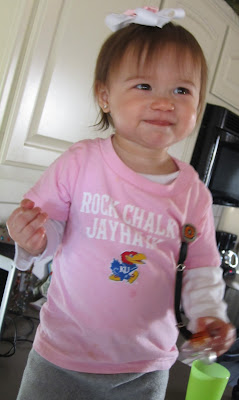 Justin and I were going to the Jason Aldean / Eric Church concert! Before we left... daddy and his baby girl! 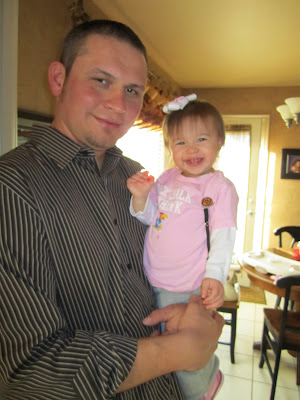 My baby girl and I 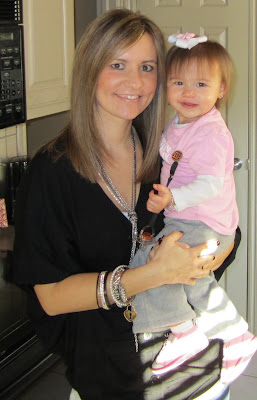 After dropping Hadlea off with A & A, Justin and I met some friends for dinner on Brookside. We set outside on the patio, which was amazing! It is so crazy how beautiful the weather is in January! After dinner, we headed to the concert! Our seats were AWESOME! 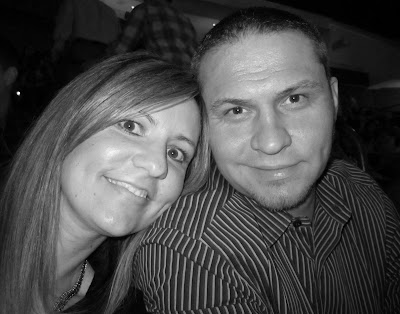 Eric Church. If you ever get the chance to go see him, GO! He is such an entertainer! I hardly every listen to country music, but I definitely have him on my play list! 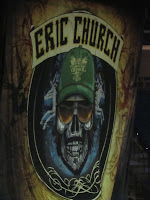 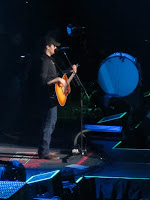 Jason Aldean. Same as above! Great entertainer. Even though Jason was the headliner, I would go see Eric Church before him again. But Jason was very good and has some great music! 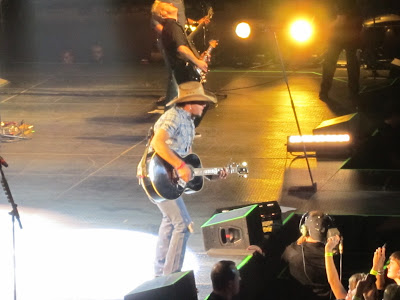 On Sunday, we woke up to about 40 degree weather! Completely different than the last two days! Bummer! Hadlea didn't get up until 10:30, so we decided on church at 5PM. We spent the morning playing! At one time, daddy, H and I were all writing on the aquadoodle floor mat and having the best time! I LOVE days with just the 3 of us... they are so few and far between!
They are calling for a major snow and ice storm Monday night into Tuesday so we decided to hit the grocery store... with the rest of everyone in eastern Oklahoma! But we took our time and had fun! Hadlea was perfect... and she wore her 'My Uncle Kicks Butt' shirt! Super cute! 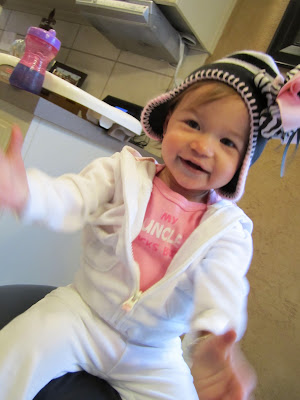 When we got home, we played, Hadlea got a bath and then we had more play time! She was in a SUPER great mood and was so funny... more animal sounds... {obvisouly she associated I LOVE YOU with blowing kisses! :) }
our nightly came of peek-a-boo...
After H went to bed, we spent some time cleaning and getting ready for the week! Next weekend, we head to my parents as I am helping host a baby shower for my friend Jennifer from high school! She is due with baby Logan, which could be anyday! We cannot wait to meet him!

I love how she carries her baby everywhere! 70 degree days sound sooo wonderful!! It's been 30 here all weekend and I'm sick of bundling up. Too bad it's only January!

Dang my monkey sure is cute!