I have pictures from the weekend and the last few days I need to share, but after being off on Monday and only working when H was sleeping on Tuesday, I am really behind at work so I need to get busy! I did want to post today about my cousin Malisa... the one we named Hadlea after. Today is the 11th anniversary of her going to be with Jesus. There isn't a day that goes by that I do not think about her. I always smile and laugh about our fun memories and some of the HILARIOUS things she used to say! You can definitely tell how beautiful she is here... 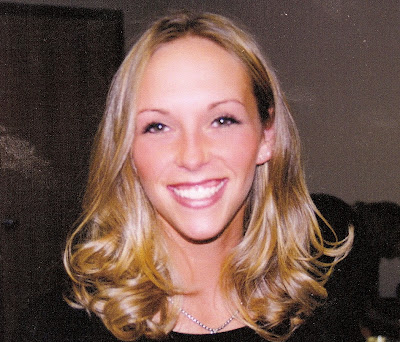 but that is nothing compared to how beautiful her heart was! If I were God, I would have taken her back too.. who wouldn't want the best! :) I just wonder where she would be today, if she were married, would she have kids, etc!? I know she watches over all of us. I know she can hear me talking to her. I know when Hadlea was sick in the hospital that Malisa was with her when we couldn't be. I know she was touching her, holding her when we couldn't. And for that I am thankful... oh so thankful!
---------------------------------------------
Hadlea has started to do some of the FUNNIEST things! Like say or more make a noise like un-ah (like no)! {I really have no idea how to write it! :)} Anyway, we lit a fire for the first time the other night and we were telling her it was hot. She would go to touch the screen, and we would tell her NO! She would reach for it and just smile at us... little stinker! {are they really supposed to test your patience at 1!?} I then asked her, "Do you want momma to spank you?" Her response, "un-ah!" Justin and I died laughing! We had no idea where she learned that. And like we have ever spanked her for her to know what that means! I would like to lie and say we left it at that, but we couldn't... we had to get some more un-ah's! We asked all kind of questions to get this response! It was just too funny!
Last night, H and I road with Justin to take his boat to storage. She was melting so we stopped to get her crackers. I gave her one and then she started doing something with her hands. I asked if she wanted more, and again, did something with her hands. I said say, "yes" if you want more... so she shook her head yes. This replayed for the next 10+ crackers. {we are trying to get her to say yes and no when we ask questions} Then I started thinking and got out the ol' trusty iPhone. I googled 'Sign Language More'. And sure enough... that little turkey was signing more! I felt SO STUPID! My little girl was trying to talk to me, and I had no idea! To say Justin and I laughed until we cried would be a complete understatement... we COULD NOT stop laughing! And again, we would give her anything just to see it again! To see MORE in Sign Language, go here. Hopefully I will get video soon! Just another reason we LOVE our new daycare!!

So sweet! And my little one test us the same way! How do they learn that at 13 months?? HA