Wednesday after work, Justin, Hadlea, Berkley and I headed to my parents in Medford. Uncle Alan, Grandad and Gigi were already in town. We left later than we had liked so we got in later than we expected. But you can guess, Hadlea got alot of attention and some play time in before bed!
Thursday, Thanksgiving Day, we got up, dressed and waited on the rest of the family to get in. We were going to the church building for Thanksgiving lunch. My dad's family is so large that we would never fit in a house. I believe they said there were almost 70 people there... great turnout and SO great to see everyone!
Our little family minus Berkley! 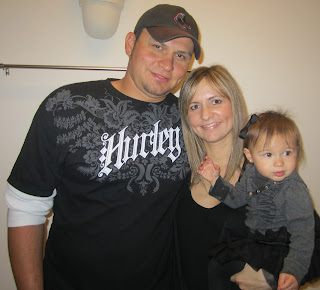 And guess who showed up!?
My baby brother! I cried like a little baby when he walked in as he was late, which made me think he wasn't really coming. I was just dying to see him so I was so glad he showed! He looks AMAZING! I just love him to pieces! 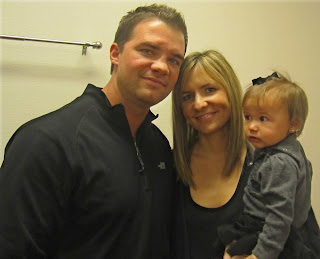 This little girl wasn't exactly the angel we make her out to be! Ha! For one, she didn't sleep well at all which caused her to be cranky! For another, she is cutting her 4 back molars and I cannot imagine the pain that causes. But when she wasn't cranky, she was SUPER cute! :) 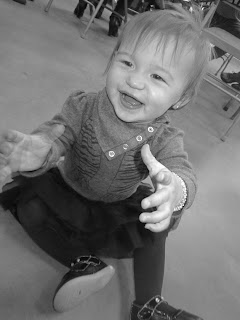 Hadlea standing and checking out her cousin Averie!
Averie is the cutest! 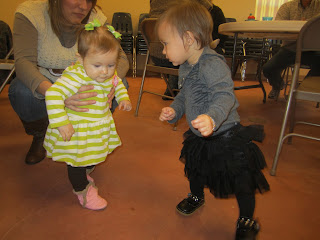 Me, with my cousin, Tyler, and our babies, Hadlea and Emery. Tyler is one of my closest cousins, and he is such a great friend! His wife, Shawna, had to work so she didn't get to come... Boo on her! I sure missed seeing her! 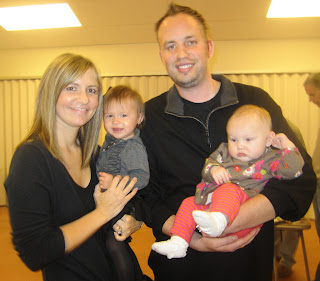 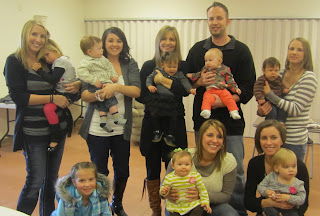 After lunch at the church building, we went back to my parents house. Here is Hadlea with her Great-Grandad, my mom's dad. I feel so blessed that Hadlea gets to know my grandparents.. both sets! I will never take that for granted! They are all some of the greatest people I have ever known, and I love them more than I could ever possibly put into words... and these pictures are some of the most precious ones I have ever taken! 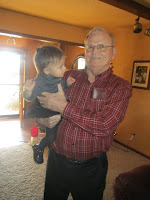 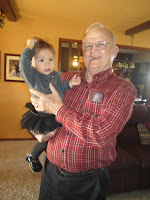 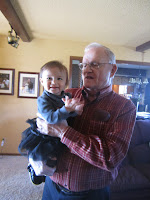 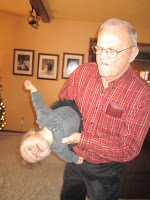 Hadlea with her Gigi and Great-Grandad!
We love you both so much! 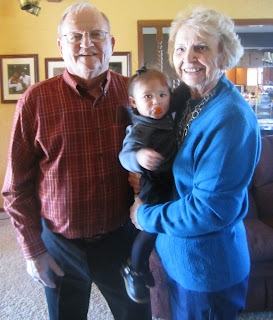 Hadlea playing with Berkley and her cousin Avery, Alan and Amanda's dog! She LOVES Avery! 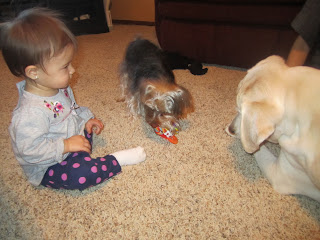 Auntie A with her two baby girls... Hadlea and Avery! :) 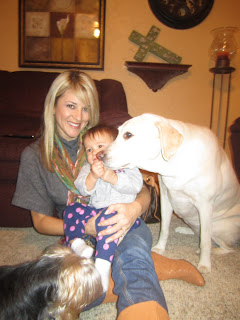 We didn't leave my parents until Hadlea's bedtime as we thought she would sleep on the way home.. no such luck, but she was perfect on the ride home! :) We played for a bit after getting home and then we were all off to bed before getting ready to shop on Black Friday.. and no, not at 5AM.. we are more of the Noon shoppers! :)

It looks like you all had a great Thanksgiving! Isn't it wonderful to get together with family? And can I just say that you look SO much like your brother! I'm sure you hear that all the time. :o)

oh looks so much fun.. love seeing all the little ones! So glad your brother came and he is looking great!