saturday, thanks & an earthquake

Let's start with the latter of the title! In Oklahoma, we have tornadoes and ice storms. I have grown up around them most of my life so I am okay with those. But today, we added EARTHQUAKES! At about 9AM this morning, I was sitting in my home office working when my window started shaking and rattling. Then the chair I was sitting in started shaking, pictures in my office started rattling and Berkley was freaking out! It didn't last but about 5-10 seconds, but long enough to know it WAS NOT normal! I ran into the living room and asked Ashli (the nanny) if she felt it. She said no, but assumed we had a ghost in the house because my pictures fell off my mantle! I told her what happened. So to check the news and see what was going on, where did I turn!? Yep, trusty ol' Facebook! Ha! Within seconds, posts were flying in right and left. The strange thing about it was the first post I seen was from someone in Oklahoma City, which is an hour and a half away! As of now, it has been upgraded to a 5.1 magnitude and they say it hit around Norman. That is just so unbelievable to me! It was a cool experience, but I would rather stick with tornadoes and ice storms...the stuff we are used to! :)
And while I am going backwards with the title, I wanted to say THANK YOU for all of the birthday wishes...facebook, texts, calls, emails! It was a great day (minus work that was all stressful)! But I had over 100 facebook messages! That is just insane to me! It's just a simple reminder of how blessed I am with amazing friends and family! I got flowers and money for shopping from Justin! He definitely knows me! And hopefully I can get in a little shopping this weekend while daddy is putting this together... 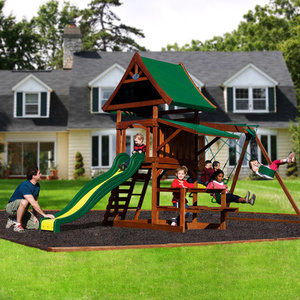 Yep! This past Saturday, Justin woke up and wanted to start looking for Hadlea an outdoor playset for her birthday. We had been talking about getting her one, and we had looked at a few. I was just thinking we would go look and see what we could find around Tulsa, but we found this one at Academy. They already had all of them marked down on clearence, so it was less than we were planning to spend anyway! I wanted to come home and look online and see if they were marked down anywhere, but Justin wasn't having it! He wanted to buy it right then! So we did! And the GREATEST thing is Rusty/Nana and Grammie/Grampie chipped in so it could be a present from all of us! Justin wants to put it together before it gets cold and so she can use it...which I think is a great idea! So expect to see alot of pictures on this thing next week! :)
Before buying the playset, we needed to make a Babies R Us run. We had also been talking about moving H to a convertible carseat because I think she is getting super uncomfortable in the infant seat. Again, I thought we were just going to look at them while we were there, but after looking, Justin was like, "which one are we getting?". Ummm...I wasn't planning on getting one because I hadn't done very much research on them, but he wasn't taking that as an answer. We ended up talking to a couple of other mothers with experience and they gave us recommendations as to what to look for. So we decided on this...the Graco MyRide 65. 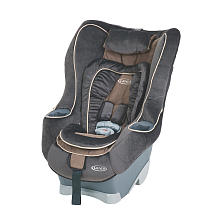 Think she loves it?! Oh my goodness she is so much easier to get to go in her carseat! She is like a new child! Ha 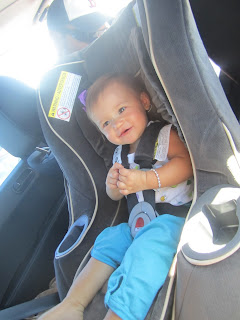 Hope everyone is having a great Wednesday! We have Parents As Teachers tonight and dinner with Nana and Rusty for my birthday! Tomorrow I will post the wedding pictures from Sunday!

UPDATE: I had to share this video that my cousin Michele sent of her kids singing me Happy Birthday! They did such a good job, and I cried like a little baby when I seen it! Thank you so much Anna, Harvey and Zac! I love you all so much! Come see us! :)