So it has been a week... a very LONG week since I have last posted. I think work is starting to slow a bit where I do not have to work half of the night, but still working a crazy amount of hours. I am thinking about two more weeks, and hopefully it will be back to normal... although I think it will be a new normal. Thanks to a few of you that have sent encouraging facebook messages and texts. During those long days it was nice to see that some of you were thinking about me and gave me a nice smile! I have some of the greatest friends and family EVER!
A lot has gone on in the past week. Hadlea is changing from a baby into a toddler at rapid speed! She makes us laugh all of the time and is starting to do things to get us to laugh... like today, Justin was laying in the floor and she went and climbed over him, turned around and pushed his face. We laughed, and she did too!
I think I could tell 100 different stories about her over the last week, but I will save you the time! Justin and I laugh about her every night as we get into bed. We re-live the day and talk about the funny things she did or how she is such a dare devil. She will try to climb in a rocking chair we have and has fallen off 100 times and still tries multiple times a day... in which she usually ends up crying. (it is only like a foot off of the ground so we do not have to worry about her getting injured.) She is just the most perfect thing EVER!
But I think the biggest news over the last week is that Hadlea has moved out of the house for daycare! Our nanny told us about a month ago that she wanted to go back to work. She used to work full-time and stopped after having her baby. She didn't want to put him in daycare, which is why she chose to become a nanny. She was ready to put her baby in daycare and go back to work. Justin and I went back and forth for many nights on whether to put her in daycare or get another nanny. I WAS SICK! I didn't know what choice to make. I knew Hadlea was ready for daycare as she loves other kids, but part of me wanted to be selfish and keep her home. I decided to seek both and see where we were lead. After going and meeting the daycare owner, and taking Hadlea over to meet the kids, I knew we had made our choice!
On Thursday, October 28, Hadlea had her first day of daycare! I was a nervous wreck the day before! I was just hoping and praying we were making the right decision. At 8AM, I got her up, fed her a bottle and some oatmeal and got her dressed. Obviously, she was a little tired as she normally sleeps until 9AM! :) 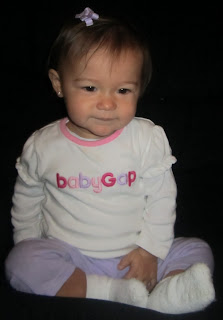 But she soon came around. We played for a bit until she was in a good mood! I wanted her to be happy before taking her over there. The daycare is an in- daycare and only 2 miles from our house. I think it will be the perfect place for her! 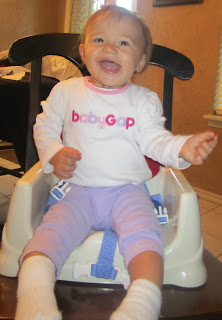 When we arrived the first morning, she crawled off to start playing with the other kids, but I as turned to walk out, she LOST it. I could hear her crying as I walked to my car, but before I even got home, the owner text me and said she was already calm and playing. She sent me text about every hour the first day to keep me up to date. It was the most awesome experience! I knew exactly what she was doing at all times... what she had played with, ate, how long she napped, everything! It definitely made the day alot easier for this momma!
Day 2 was the Friday before Halloween and the day of her very 1st Halloween party! I got her up at 8AM again, fed and changed her and we played for a bit again. She had to wear her cute candy corn shirt!

And as I left on day 2, I called Justin and told him I was more sad than I was on Day 1. She didn't even cry when I left! I put her down with another little girl, she started playing and as I turned to walk away, she crawled the opposite way to the playroom! I didn't know whether to be happy or sad. Ha! I again got texts throughout the day from the owner keeping me up to date! She had a great day 2 and was happy to see me when I picked her up!
When we got home, H had a package from Grammie and Grampie! 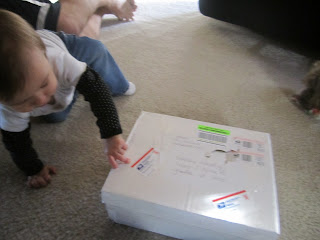 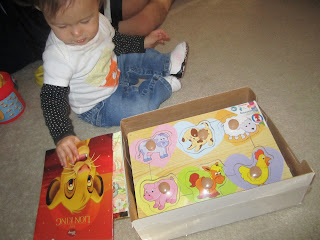 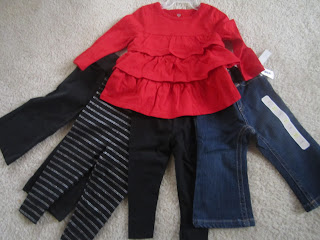 Daddy got home shortly so we spent some time playing.. or Hadlea climbing over daddy... 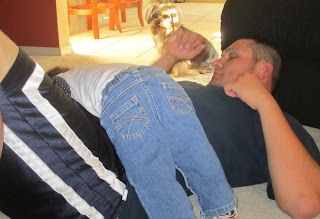 and under daddy's legs... 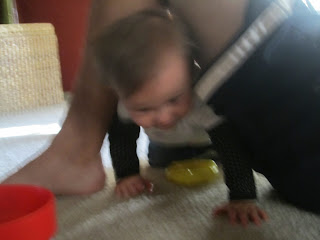 And then we all changed and headed to dinner with friends! (I LOVE that look!) 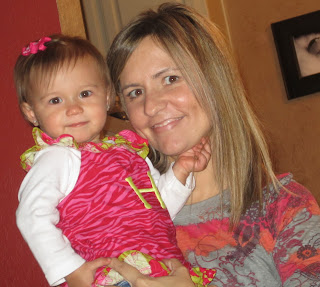 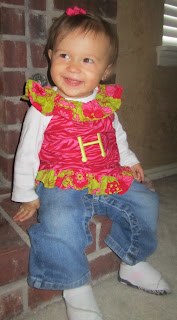 And when we got home, we did some more playing! She makes the funniest faces these days too! 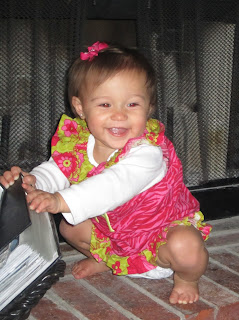 No idea what funny face this is! 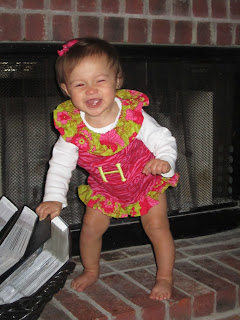 I have TONS of pictures from Halloween weekend and I will 'hopefully' get them posted in the next couple of days! I hope everyone had a great week and a safe Halloween!

she is just so cute. I am glad that she is enjoying her daycare and I think that you guys made the right choice. Glad they are keeping you updated so you know what is going on. Cant wait to see Halloween pictures and hope things slow down for you.

I'm so glad she is enjoying daycare. She is such a doll! I can't wait to see Halloween pictures.