This weekend was CRAZY! I think I need to learn to plan a little better! Ha! This weekend I had a baby shower that I was helping host and a high school friend's wedding and reception...and both of these were 2.5 hours apartin distance! I have been waiting for this wedding for so many years! LaTisha moved to Medford when we were in junior high, I believe. I remember the first time I met her in front of our lockers. I introduced myself and she said she knew me from summer basketball camps. I used to attend tons of summer basketball camps...pretty much anything I could get in and/or any one my parents would be willing to drive me to. I did somewhat remember LaTisha after that. Justin, the guy she married, graduated with my older brother. His family had lived in Medford their entire life, and I ran around with his sister, Aimee. Justin and Tish have been together for YEARS...like probably longer than Justin and I! :) So...like I said, I have been waiting on this wedding for years! :) But, because I am terrible at planning, I thought it was a different weekend. When I asked Stephanie if I could give her a baby shower, we planned for September 11! And shortly after I sent out the invitations, my lovely mother reminds of the wedding date! Dang it! But I knew I would manage to do the baby shower and make the wedding reception...so it wasn't a big deal, although, I would have loved to make the wedding!
Hadlea has been TERRIBLY cranky the last few days...like fit throwing - arching her back, kicking her legs, screaming, slapping things out of my hand, etc. {Can the terrible 2s start at 9 months?!} Anyway, the nights have been very long! I just feel so bad for my sweet teething baby! I know her mouth hurts so bad. We have tried medicine, teething rings, ice, teething tablets, orajel...but there is not one thing that seems to take the pain away for more than a few minutes! It just breaks my heart and makes me shed a few tears with her! I just want to make all of her pain go away! I will continue to do what I can and pray it goes away soon! {if you do have anything that really helped your teething babies, please do share!} So Friday night, we decided to stay home with the little monster. I was NOT about to get her out of the house. I was just hoping a little mommy and daddy play time would do the trick! :)
Saturday, daddy left to fish and Hadlea and I played and packed as we were staying the night at Grammie and Grampie's house. After lunch, we left for the baby shower! Here are the invitations I made and sent out... 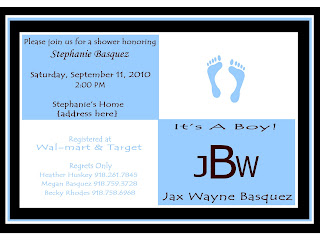 And the cake I had a friend make! Super cute!
We were using baby blue, black and white as the colors, which are the nursery colors. Stephanie was having a quilt made to match those colors for baby Jax so I thought the baby bottom cake with the quilt was perfect! 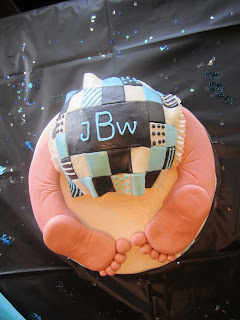 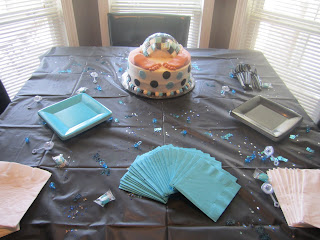 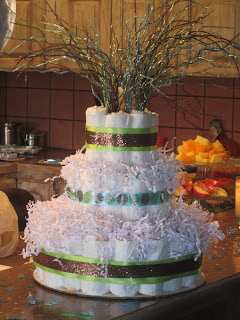 Fruit Table
{I didn't take a picture of the dip table} 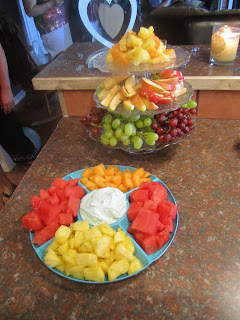 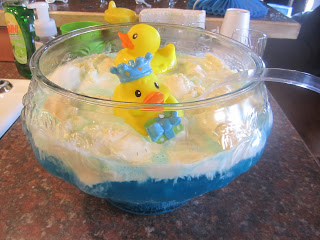 Stephanie and her cake! 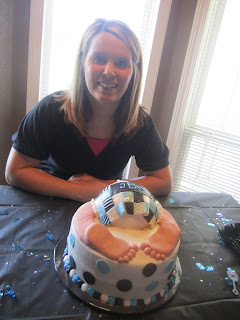 Stephanie and I
{Stephanie is married to Justin's first cousin, Joey. Justin went to high school with Stephanie, and I think they used to date. I think some people would think this is strange! Ha! But she is such a sweet girl! I am so glad I have had a chance to get to know her! She also helped host my baby shower for Hadlea! We really enjoy getting together with Joey and Steph, although it doesn't happen often.} 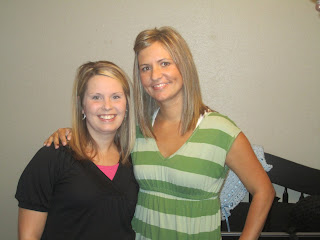 Steph and Hadlea
You can barely see Steph's belly! :) 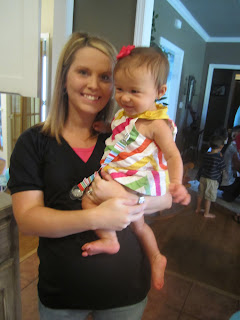 Stephanie and the hostesses
Megan (Stephanie's SIL), Becky (works with Stephanie), and I
I do have to thank the hostesses for stepping in. I was in the middle of planning everything when Jake got hurt. They took over everything except for the cake, which I already had ordered and the invites, which I had already started making. It was nice not to have to worry about anything else! 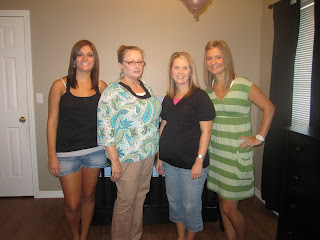 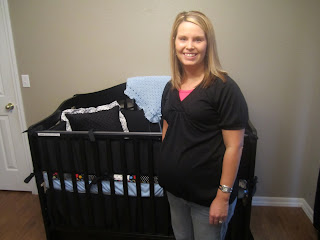 We had a great turnout! 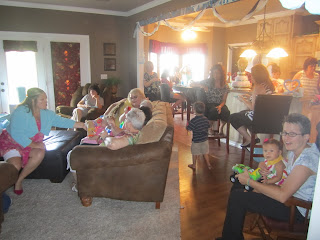 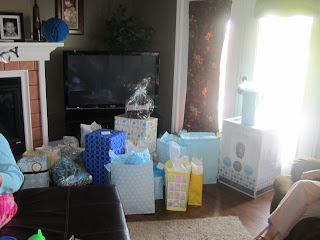 And believe it or not, Hadlea was terrific! I was kind of scared to take her since she was so fussy Friday night, but she LOVED the other kids, especially Stephanie's niece. 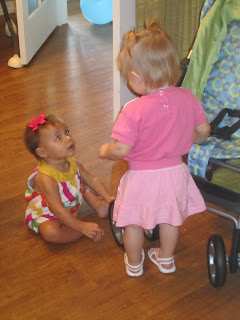 Shortly after the shower ended, we headed for Medford. We arrived after the reception had started, but everyone was still around so we got to see alot of people! It was such a good time! Here we are with one of my very best friends, Jennifer, and her daughter Ady! Ady LOVES Hadlea, and her momma tells me she is an avid reader of the 'Huskey Happenings'! She LOVES videos of Hadlea! :) 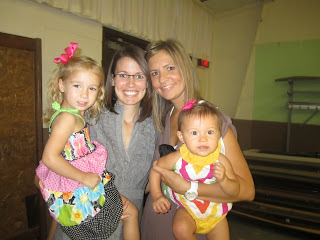 And here are the sweet girls themselves!
Ady...we love you and cannot wait to see you! 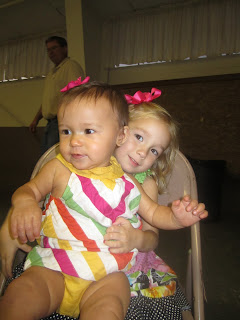 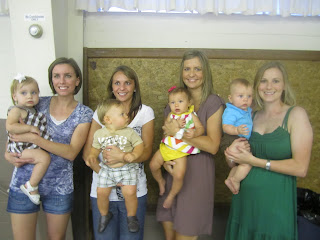 You can see Krissy/Riley here.
{Amanda doesn't have a blog, but she let me know she reads while she 'pumps' at school on her break and I told her I would give her tatas a shout! :) So hi Amanda..I hope the pumping is going well! We love and miss you and Jake! :) }
Sunday, we went to church and then spent some time playing outside. 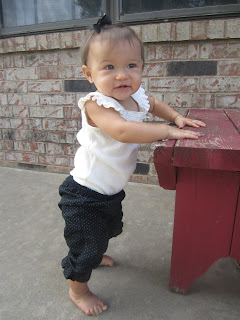 i {heart} this picture! 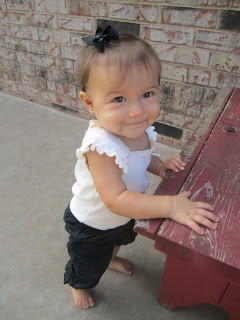 And this sweet boy LOVES his grammie's house! They have trees in their backyard and the first thing he does when he gets there is run to the backdoor...when you open it, he heads for the biggest stick he can find! 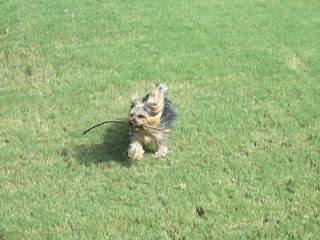 We tried to get a few 9 month shots...but it didn't go so well.
Although this one was adorable... 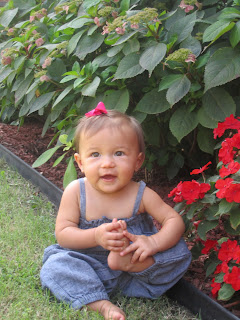 And this one is so Hadlea... 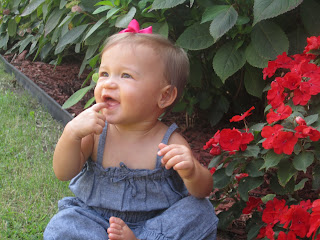 Most of them were like this! Not so good!
But thanks to Laura{here} for the front yard and flower bed! It looks great! 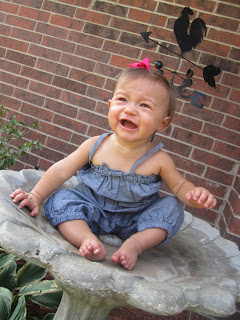 After this picture, we changed Hadlea, put her in the car and headed home! We were barely in town 12 hours and she was exhausted! We got home to daddy, played, went and bought groceries, made a homemade pizza and settled in to watch the Dallas Cowboys beat the Redskins {which didn't happen}. It was a great weekend...minus the Cowboys loss!

That cake is so awesome! It looks so real. Your friend did an amazing job.

Hadlea is just as cute as ever!

What a cute cake. and I want all her clothes!!! I love her she is so cute!

I saw that cake on Pam's page! It turned out adorable!!

I have never seen such a cute baby shower cake before. Great job, I want to have a cake like this one for my upcoming baby.

Wow girl! You are the busiest lady I know! Haha! :o) Glad you had a fun weekend and Hadlea turned on the charm when it really mattered. She's such a cutie.

And I LOVE that cake!

Thanks for the shout out!! Hadlea looks beautiful as always!!
Amanda