Day 4 (or Saturday) began just like the rest...get up, check out the ocean views, play and hit the water! Anna was normally up when Hadlea got up so she was waiting to play! Every morning they got in some play time and Hadlea loved it! She thought Anna was the greatest! 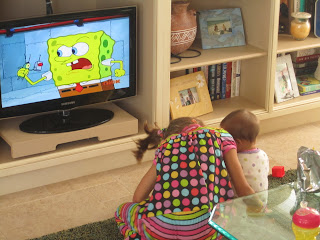 We hit the beach Saturday morning, but Hadlea didn't last long before she was off for a nap. 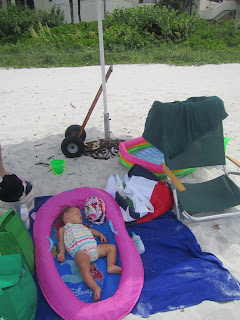 And with your first girls trip, comes your first real drink...of Diet Coke, that you get all by yourself! (Anna, don't let your brothers see this, they will be super jealous! :) 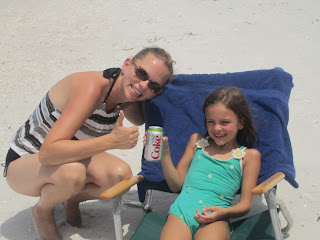 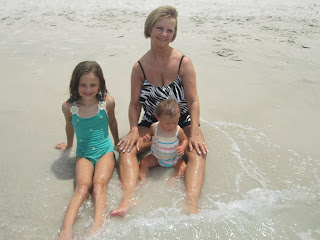 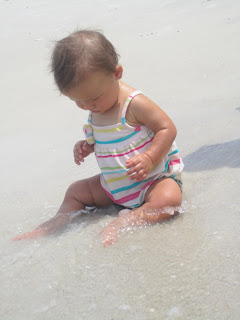 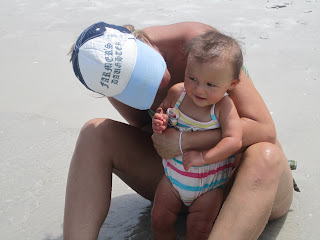 oh those feet...i could eat them up! 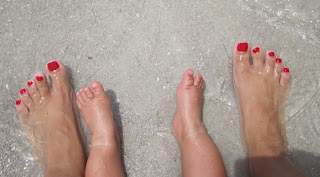 Michele and Auntie B getting some sun! 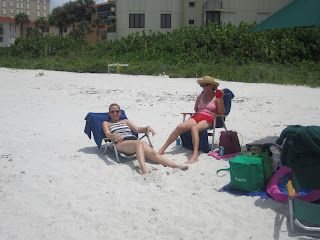 That evening, we all split and ran to some stores we were wanting to go to. Mom, Hadlea and I hit the outlet mall as I had a coupon at the Coach Outlet, and I was not passing it up! We found not one, but TWO, purses that I loved! YEAH! We also hit Carter's and got Hadlea some winter clothes! Auntie B, Michele and Anna went to a few stores to get Anna's brothers, Harvey and Zac, a present. She is such a good big sister!
Day 5, our last day, was the dreaded day...we had to leave! This was one of my funnest trips to date. I would like to say my most relaxing trip, but I think those are going to be few and far between with a little one, but I wouldn't have it any other way! Hadlea was SUPER good! I know some babies get out of routine when traveling or become fussy when not in their own surroundings, and Hadlea is always so great to go with the flow! She is perfect in so many ways!
Michele and Anna Grace had a 10am flight out of FL and Mom, H and I had a 12pm flight out. Due to Michele and Anna's long layover in ATL, we all got to meet back up. Anna enjoyed pushing H around the airport! 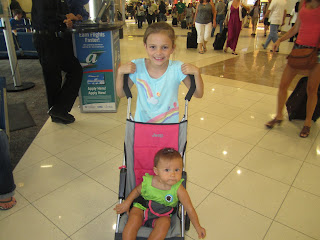 Our first flight from FL to ATL was great! Hadlea did terrific! When Michele and Anna had to leave ATL to head to KS, we said our second round of good-byes, and they were off! Our flight out to OK wasn't too far behind them so we headed to our gate. As they started boarding our flight, I stopped to fix Hadlea a bottle so we were some of the last to check-in. They had OVER BOOKED our flight! I was sick! We had already had a 2 hour layover, and if you have ever traveled with a baby, you know waiting is NOT fun! Anyway, we did not get on the plane and the next flight to OK wasn't until 5 hours later. We got to spend a total of 7 hours in ATL's airport. As stressful as it was, Hadlea was again, PERFECT! I had packed a large blanket in case of something like this, so we laid it out and put out some toys and she played. We would also take her on walks in her stroller. The flight back to OK was great as well! We never had any issues! She talked and waved to everyone on the plane! We made it back to OK about 10PM, far later than our original 5PM...but oh well! It happens. Justin and Berkley met us at the airport to pick us up! I thought Berkley was going to have a nervous break down when he seen us! Poor baby missed his mommy...I know Justin did too...he just doesn't show it by licking my face! :)
Our trip was amazing! Thanks again to Auntie B for opening your condo to us and to Michele and Anna Grace for meeting us! Thanks to mom and dad for the flight! My family is AMAZING! I am beyond blessed to live the life I live!