Is she crawling?? & more

So I don't really want to be the mom that thinks her kid can do everything just because it might have 'accidentally' happened once or twice. I just never know when to write down that Hadlea did stuff! She might have put the pacifier in her mouth once or twice before she could actually do it all of the time, but chances are it was just stuck on her finger and her finger just happened to be somewhere near her mouth! :) I would like to say Hadlea is crawling, but she doesn't do it full time. She will move her arms and knees a few times and then fall to her belly. Although she can push herself back up into sitting position and go again! Justin and I cannot get enough of it! It is just too hilarious....See for yourself. Is she crawling?
We took these pictures Wednesday night before taking dinner to G and Taran. It is definitely not a night I would like to remember, but sweet girl was in a great mood and I was taking full advantage! 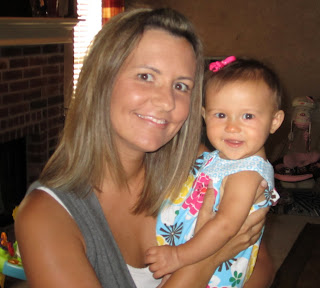 She thinks her daddy is really funny! 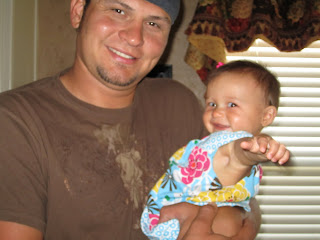 When we got home that evening, we played in the floor. This is when I got the video of her crawling. She loves to spend time in the floor where she is free to roam...or watch her brother! 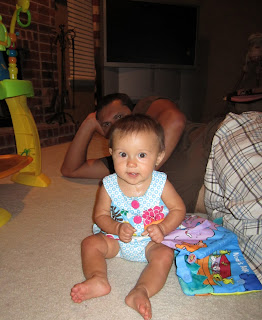 She also pulled herself up against the recliner. However, I could not get her to do it again! Figures! 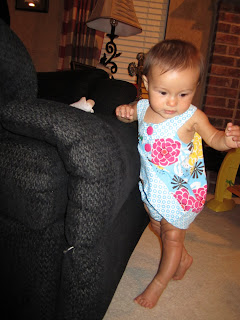 Last night when I got home from the gym, daddy made dinner and we played outside! She loves to sit on the sidewalk and dig her fingers into the concrete. It is almost disturbing! 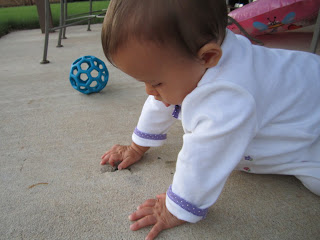 Justin started calling Hadlea Chunky Monkey the moment she was born. I can bet that she is called Monkey more times in a day then she is called Hadlea. And I guess this is proof there is a reason for everything! She has to put her feet up on everything! 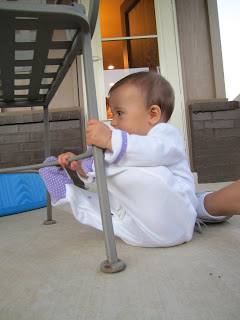 We played ball with Berkley while we were outside... 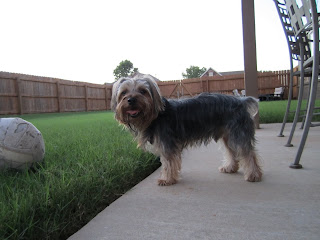 and wore him out enough that he went in and went to sleep on the clean clothes! 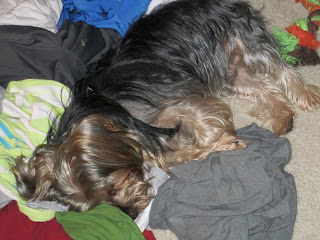 And one more video. These have to be my favorite!
Daddy and his baby girl. She just cannot get enough of him!
Have a great weekend! We are off to the....yes, LAKE! :) Our very best friends are in from Kansas City and I cannot wait to get to them! Lots of pictures to come! Stay Safe!

H is getting too big way too fast! I love her laugh!