I am pretty sure this weekend might have been Justin's dream weekend...getting to watch the professionals fish and finally being able to celebrate Father's Day as a father! I told him since it was Father's Day weekend we could do anything he wanted. So he started out HIS weekend by taking off of work on Friday and heading out to watch the Bassmasters. They were in Oklahoma this weekend fishing on Fort Gibson Lake. I think they only make it here every other year or something like that, so when they come to town, I think the entire state shows up! He left at 5am on Friday and didn't get home until close to 8pm. I know he had a great day. I think the only thing that could have beat the day was him fishing in it! Ha! He called no less than 50 times to fill me in and tell me who he was watching at the current time! There were 93 anglers fishing the first day. And he definitely made his rounds to see as many as he could. He went with some friends. They took the pontoon so they would have some shade. I believe it was around 90 degrees on Friday!
On Saturday, he left again at 5am. Hadlea and I slept in and waited on Uncle Jake to arrive. Jake showed up around 930am and brought us breakfast. After we ate, he played with Hadlea while I got ready and packed some things for the day. Hadlea thought Uncle Jake was pretty funny. She couldn't take her eyes off of him. She ended up falling asleep before he left so I never got a better picture than these! Boo! 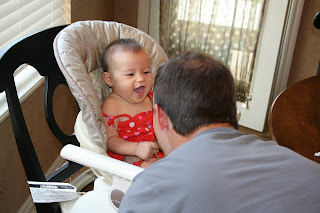 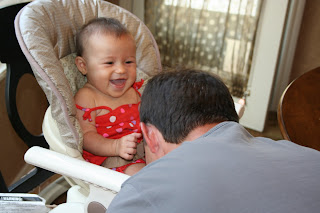 Around 11am, Hadlea and I headed out to meet Justin for the weigh-in. On our way there the air conditioner went out in my car! I think it was supposed to be 95 that day! The last 15 miles were HOT to say the least. But Hadlea was asleep and didn't seem to mind driving with the windows down! :) We met daddy and hung out under a shade tree with friends until it all started. Mark, Deanna and Courtney met us from Arkansas. I had tons of pictures to share of everyone and the weigh-in, but I lost my camera sometime after everything was over so no pictures! *sad face* Oh well...atleast I had all of her pictures downloaded. It could have been worse! It just ended up being an expensive day...the ac and the camera! :) Richard, Justin's fishing partner, drove Hadlea and I home so she didn't have to ride without ac. Thanks to him! Poor daddy had to ride in the hot car! He is such a good guy! Saturday evening we got home late...fed H, took showers, and we all went to bed! Hadlea slept 11 hours. She must have been worn out!
Sunday was more Bassmasters and Father's Day. I got up early to get ready trying to beat Hadlea up and let daddy sleep in since he had been up at 5am the previous two mornings, but just as I got up, she started moving so daddy got up with her and they were playing in the floor when I got out of the shower. We played a little more and gave daddy his card! I felt so blessed that morning to finally be a mother and see Justin with his baby girl. He is such an amazing husband and father. Truly my best friend, and I know Hadlea and Justin will be best friends growing up. She loves him so much and it melts my heart. I know he will never take her for granted. I also know he will never tell her NO..so we will have to see how that goes in the future! Ha! 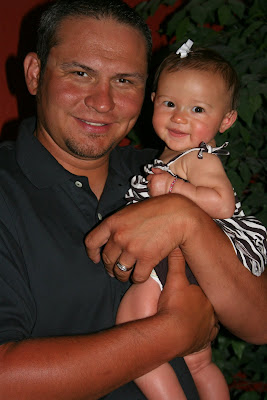 our family with the cameras self timer!
hadlea must have thought I was funny running towards them! 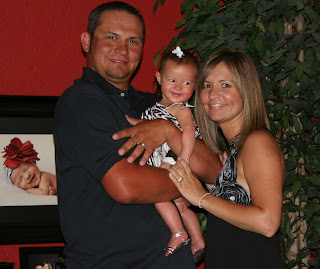 After church, we grabbed lunch, fed Hadlea and then we were out the door. But not before a couple of more pictures... 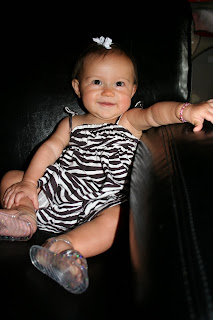 she looks so big! slow down baby girl! 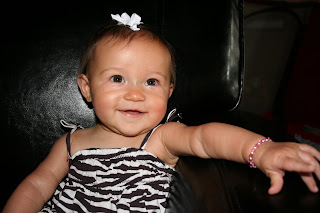 When we arrived at the weigh-in the ESPN guys were giving their hourly update. This is Keith, Tommy and Mark Zona. Completely off the subject...but do you ever see an older man and think, "I bet he was hot in high school?!" Well, I do. And I cannot even imagine how good looking Mark Zona was in high school. He is on the far right. You can check out pictures here. My husband knows my love for Zona. I mean really...do you think I just enjoy hanging out in 100 degree weather to watch fish being weighed on a scale!? I enjoy the competitive nature of fishing...but even beyond that...there is always Zona to stare at! :) 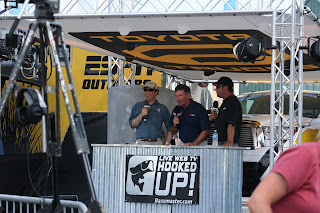 and just some pictures of the weigh-in... 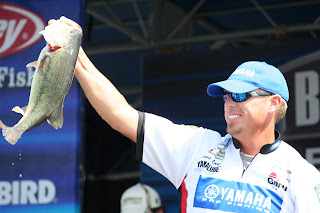 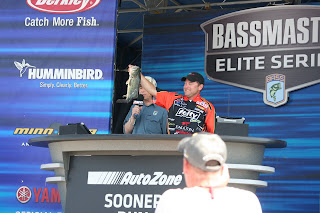 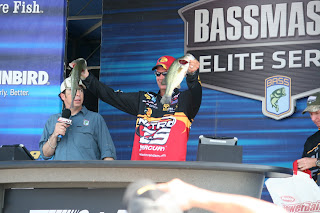 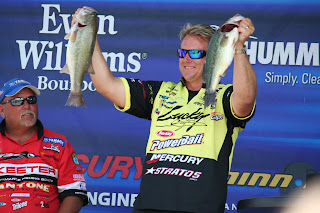 and the winner...Tommy Biffle of...you guessed it, Oklahoma!
This is Tommy's home lake. He owns land on the lake.
The day of practice, he mowed his lawn and had a fish fry because he didn't want to give spots away to the other anglers.
funny guy.
and if my guy isn't winning, it should be the local! 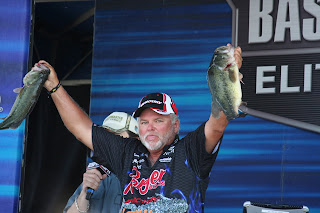 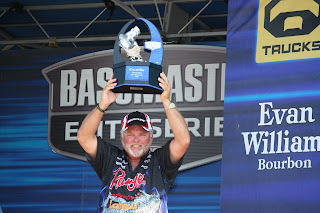 my guy didn't even make the finals.
mike iaconelli. funniest guy ever!
he has truly changed the face of fishing.
if he catches a really nice fish, he break dances on his boat.
so not kidding! hilarious!
earlier this year, he caught a HUGE fish and starting throwing up off the side of his boat.
to say he is dramatic is an understatement.
i met him last year in Arkansas for the second time.
very nice guy...and he better start winning! 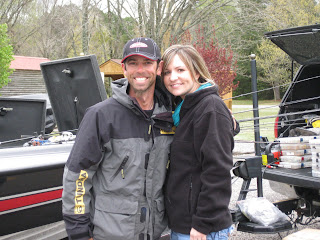 After all was over, we headed to dinner and home. It was a LONG and HOT day! I think with the heat index it was 111! Hadlea was amazingly great! She is such a trooper and just does whatever we want. She loves people and will 'talk' to anyone that looks at her! It was also so great to do this with Justin on Father's Day. He loves fishing, obviously, and is so very passionate about it. I know he wouldn't have wanted to spend his 1st Father's Day doing anything else!

you are such a great wife. I would hate doing that ha ha but it is fathers day and they should get to pick!

I am thinkng you should send me those outfits of hers that she has been sporting in her photo shoot and then on fathers day. LOVE THEM!

Hi there! I'm stopping by your blog - saw you on Courtney @ With Gratitude's blog. I read your "about me" and we just have a lot in common! Love your attitude about life :) So I just wanted to say hello!