Justin and I had a GREAT weekend! Friday night we hung out and relaxed. I decided to head to bed early as we were to leave early for the football game on Saturday morning so he headed outside to hang with the neighbors. We left Saturday morning and headed to Norman, OK for a little Sooner football! OU played Tulsa University....I LOVE the Sooners, but Tulsa will always hold a special place in my heart! My cousin was their quarterback for 4 years and they had some great games during his time. After a few tries in the NFL, he decided to become a coach. I SO miss watching him play! Just a quick action shot! :) 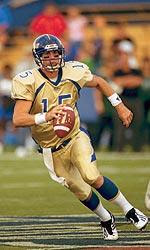 The game ended up being a blow out. OU won 45-0. The game was fun...I don't really think you can beat a day of football! 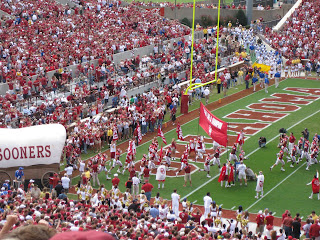 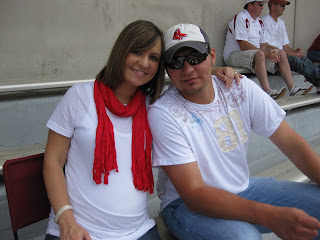 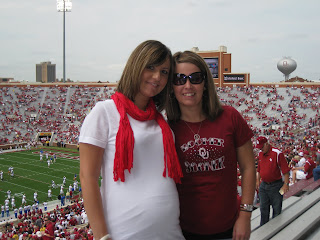 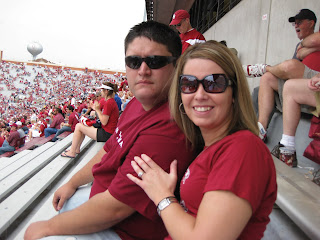 On Sunday my mom had came to town. We shopped a little for the nursery. My older brother, Alan, and his girlfriend, Amanda, came over for supper on Sunday and we watched Dallas play the Giants...which I am NOT about to discuss!

On Monday, we had our 4D ultrasound! It wasn't scheduled until 3:30 in the afternoon so I was a wreck ALL day just waiting to go see her cute little face! Justin, Alan, my mom and Justin's mom all drove through rain and hail to get to the ultrasound....and wouldn't you know, we didn't even get to see her! :( She had her feet in her face and wouldn't turn for the life of us. Halfway through, I got up and walked around, ate some crackers and drank some rootbeer...no luck! We will reschedule in a week or two and hopefully she will cooperate a little better! :) I know she is not going to be stubborn forever! ha! Below is a link of what we got of the ultrasound. Hopefully...better luck next time!
www.AnticipationBabyView.com/AUSTUL/Baby0909211540.asf

And where would that stubborness come from- you or Justin??? Maybe she is shy think about it that way! Anxious for your shower on Sunday and to see you again!
XXOO
Aunt Rene