Tulsa State Fair
And it is already fair time again! I feel like it was just months ago that Justin and I went to our first fair together. What an experience! It was in 2001, Justin and I had just begun dating. Me... having no idea that he was afraid of heights and him... not wanting to be a chicken and tell me he was a afraid of heights...I talked him into riding the Zingo or something that goes really high in the air. I remember him talking 100 mph and his knuckles were as white as paper as he held onto the seat...his sister Leslie was with us and I could see her down on the road talking on the phone. Later, I learned that she was calling her mother to tell her what Justin had done. I think they were all scared for his life...thank goodness they didn't kick me out of the family back then!
This year we took Riley and Hannah...and what another experience! Riley loved every ride, but wanted to play every game we passed. He threw darts and hit 4 in a row. He won a bear and won Hannah a flower. He also played a fishing game in which he caught 4 fish....along came another bear!
There were not many rides for poor Hannah. She kept getting put back on the merry-go-round to keep her occupied...although she didn't seem to mind.
They both stayed the night with us. Connect 4 was a big hit...just seeing who could fill up the rows the fasted. It was a good time. Hannah would get really excited for her bubba when he would beat Uncle Justin! 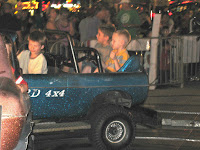 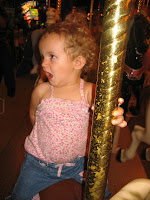 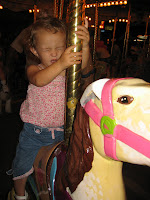 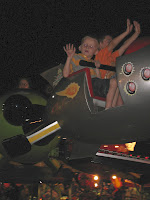 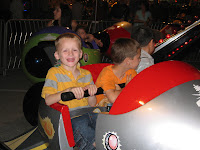 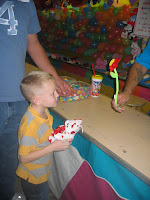 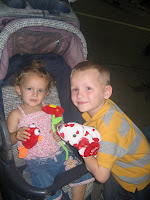 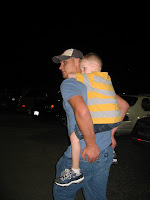 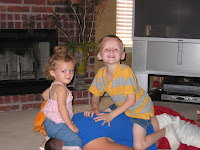 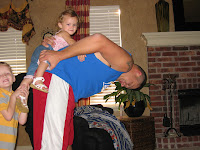 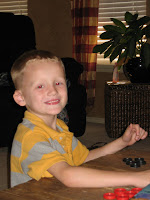 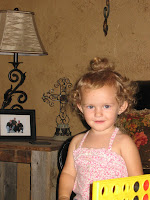 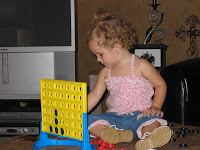 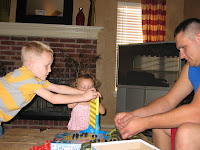 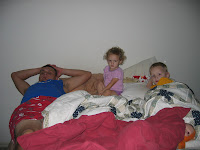